McConnell announces Senate will take up police reform next week 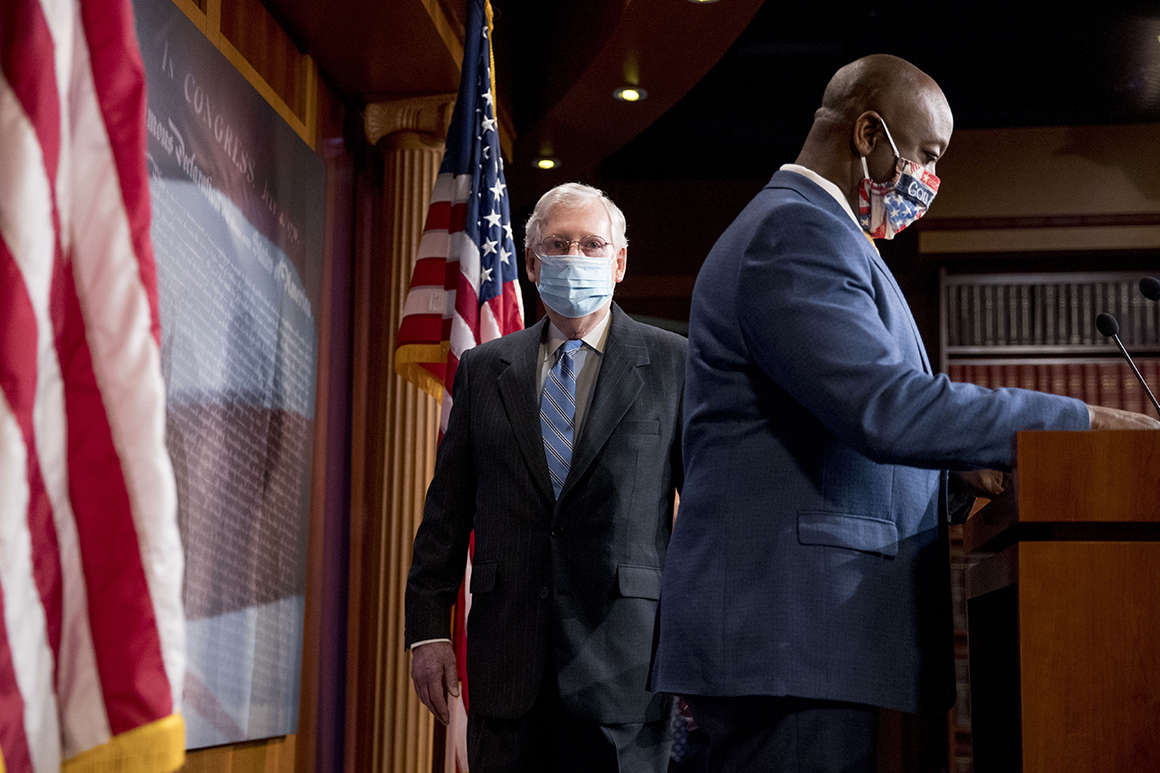 “Our Democratic friends — if they want to make a law and not just try to make a point, I hope that they’ll join us in getting on the bill and trying to move forward in the way the Senate does move forward when it’s trying to actually get an outcome,” McConnell said.

“We’re serious about making a law here,” he added. “It’s not about trying to create partisan differences. This is about coming together and getting an outcome.”

McConnell’s announcement was a stark reversal from earlier in the week, when Senate Republican leaders posited that the chamber would not consider police reform until after the Independence Day recess. But public opinion has swung sharply in favor of reforms in recent weeks, putting additional pressure on GOP leaders.

It remains unclear whether Democrats will give Republicans the votes to open up a formal debate on Scott’s bill. Scott said he has had frequent conversations with Sen. Cory Booker (D-N.J.), who co-authored the Democratic plan, but there are no active bipartisan negotiations, raising the prospect that next week’s procedural vote could fall along party lines.

“I don’t think the nation is going to allow us to lose the momentum,” an optimistic Scott told reporters.

Senate Minority Leader Chuck Schumer (D-N.Y.) criticized the GOP proposal Wednesday, saying it fails to “rise to the moment.” Schumer noted that the GOP bill does not explicitly ban the use of chokeholds and “no-knock” warrants, unlike the Democratic proposal, and said it doesn’t include “real meaningful accountability for individual officers’ misconduct.”

But Schumer didn’t close the door completely to negotiations and said he expects Senate Republicans to work with Democrats to make “significant improvement.”

“This is not about letting the perfect be the enemy of the good. This is about replacing what’s ineffective with what’s effective, and we must have effective change,” he added, indicating that Democrats are not ruling out supporting a floor debate.

Senate Minority Whip Dick Durbin (D-Ill.) said Democrats “really need an understanding from Sen. McConnell” on whether it will be “a take it or leave it moment,” or if both sides intend to “sit down and legislate.”

Scott’s bill requires additional disclosures about the use of force and codifies reporting requirements on the use of “no-knock” warrants, according to two sources and a copy of the bill text obtained by POLITICO on Tuesday night. It also provides incentives for chokehold bans.

The bill, which was formally introduced Wednesday, comes as the country faces a reckoning over police brutality in the wake of the death of George Floyd at the hands of a Minneapolis police officer.

The House is expected to vote as soon as next week on the Democratic bill. Members of both parties are hoping to get a bill to the president’s desk before the July 4 recess, but so far there are few indications that Democrats and Republicans can strike an agreement.

The GOP bill would create reporting requirements on the use of deadly force by officers and reduce federal funding for state and local police departments that fail to comply. In addition, the legislation requires state and local governments to submit reports on “no-knock” warrants to the Justice Department. It would also limit eligibility for funding if a law enforcement agency does not have a policy that prohibits the use of chokeholds “except when deadly force is authorized.”

White House Press Secretary Kayleigh McEnany said later Wednesday that President Donald Trump “is fully in support of the Scott bill” and “every element of it.”

The measure also provides grants for the purchase of body cameras and the development of policies and procedures related to their use. In addition, it increases penalties for false police reports and creates a Commission on the Social Status of Black Men and Boys. That bipartisan measure would provide a report on conditions that affect African American men, such as education, health care and the criminal justice system. Another commission would review the criminal justice system entirely.

The GOP bill also would make lynching a federal crime. While the House passed a widely backed anti-lynching bill in February, Sen. Rand Paul (R-Ky.) recently called for changes to the legislation to ensure that lynching charges don’t extend to minor injuries. Paul’s objections resulted in a heated exchange on the Senate floor earlier this month with Booker and Sen. Kamala Harris (D-Calif.).

The bill includes another bipartisan proposal that would make it a crime for a federal law enforcement official to engage in a sexual act with an individual in his or her custody or “while acting under color of law.”

Some advocates are optimistic, including Holly Harris, president and executive director of the Justice Action Network, who described Scott’s bill as a “baseline for negotiation.” In a final compromise bill, Harris said she would like to see provisions that address demilitarization and qualified immunity.

“We obviously want a broader package,” Harris said. “The environment is so much more ripe for legislation than it was for the First Step Act.”