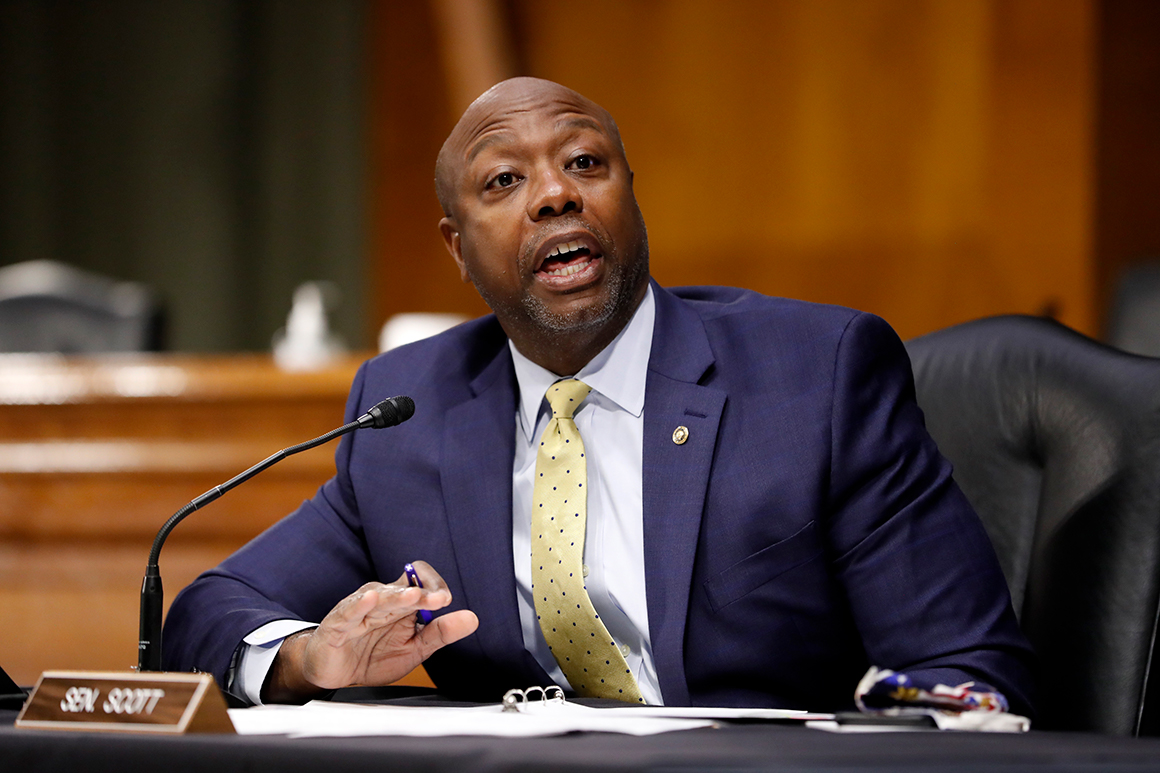 McConnell’s pronouncement comes amid encouraging signs for advocates of police reform. White House chief of staff Mark Meadows met with Scott later Tuesday to discuss his ideas, emerging from the meeting declaring that President Donald Trump wants to act “sooner rather than later.”

“We’re letting stakeholders establish their priorities. Hopefully, we can be responsive with real legislation or action,” Meadows said after meeting with Scott. “We want to let our actions speak louder than our words.”

Scott has taken on a more prominent role in the party as top Republicans wrestle with how to properly respond to the growing outcry over racial injustice in the U.S. criminal justice system and controversial police practices that have disproportionately targeted African Americans. Scott’s Republican-only working group includes Sens. Lindsey Graham of South Carolina, John Cornyn of Texas, Shelley Moore Capito of West Virginia, Ben Sasse of Nebraska and James Lankford of Oklahoma.

McConnell said Scott has been asked to draw up “a proposal to allow us to respond to the obvious racial discrimination that we’ve seen on full display on our television screens over the last two weeks, and what is the appropriate response by the federal government.”

On Tuesday, Scott presented some of his ideas to GOP senators during a closed-door lunch, the first formal step as Senate Republicans seek to build a consensus within their own ranks. Talks are in the early stages, but senators said they were optimistic the chamber could have legislative text before the July 4 recess.

“Time is of the essence. I think it’s important for this nation to take a very powerful stand.”

Senate Majority Whip John Thune of South Dakota said Scott’s group will focus on reaching an agreement among Republicans, in addition to securing Democratic support down the line.

“I think there’s a path forward to do that. The question is, how much the Democrats are willing to cooperate on that,” Thune told reporters. “And I hope, I hope a lot, because I think it should be a bipartisan issue.”

Supporters of police reform on both sides of the political aisle have been buoyed by an uptick in public support for their initiatives, especially given the recent media attention and nationwide protests surrounding the killing of Floyd, who was pinned to the ground for nearly nine minutes by an officer who had his knee on Floyd’s neck while Floyd begged for air. The officer, Derek Chauvin, is facing multiple charges including second-degree murder.

“There seems to be a lot of momentum behind this right now, and if we can keep driving it forward maybe we can get to a point where we can actually legislate, and in a bipartisan way, which would be ideal,” Thune added.

“Time is of the essence. I think it’s important for this nation to take a very powerful stand,” said Scott.

Cornyn, a top adviser and confidant of McConnell, said there is no specific deadline but predicted the group could unveil a proposal by the end of this week.

While the specifics of Scott’s plan are still in the works, it does not include an explicit ban on the use of chokeholds by police officers — a key feature of a sweeping police reform bill released Monday by House and Senate Democrats. Democratic leaders in the House say they hope to hold a vote on their measure before the end of the month.

“While I might support the elimination of all chokeholds, I think the way to get there is provide more training and more resources so that the local jurisdiction has the ability to make that decision themselves,” Scott said.

His plan would include stricter federal reporting requirements on uses of force that cause death or serious injury, including a threat to slash funding for departments that fail to meet the standards. Scott’s proposal would also impose penalties on officers not using body cameras, among other initiatives, such as creating a national criminal justice commission.

Ahead of Meadows’ meeting with Scott, the South Carolina Republican acknowledged that his group is “on a separate track from the White House,” complicating potential efforts to push through a bill that has the president’s support.

In addition to drawing up a congressional response, Republicans are urging the Trump administration to act unilaterally. For example, Sen. Roy Blunt (R-Mo.) is encouraging Attorney General William Barr to reinstate federal pattern and practice reviews for police departments, a program that was cut by former Attorney General Jeff Sessions. Blunt said he discussed the matter with Barr on Monday, adding that Barr “seemed more than willing” to do so.

“If you’ve got a [police] department that has apparently the systemic problem that goes well beyond a couple of officers, a department like that has a hard time reforming itself,” Blunt told reporters.

The politics of racial justice issues have vastly shifted in recent years in favor of adopting sweeping reforms to a criminal justice system that many lawmakers view as systemically racist. During the closed-door GOP lunch, Sen. Tom Cotton (R-Ark.), who last week called for the military to quell unruly protests and riots associated with the Floyd killing, urged his colleagues to be “sensitive” to the concerns of African Americans.

“Young black men have a very different experience with law enforcement in this nation than white people, and that’s their impression and experience and we need to be sensitive to that and do all we can to change it,” Cotton said, according to a source familiar with his comments.

“Most in our conference don’t want to go that far, but I’m really going out to see if I can get a few others interested in looking at that as well, because I think that’d be the one thing that shows our conference means business,” Sen. Mike Braun (R-Ind.) said. “You never know, this might be a watershed moment.”

Marianne LeVine and Jake Sherman contributed to this report.