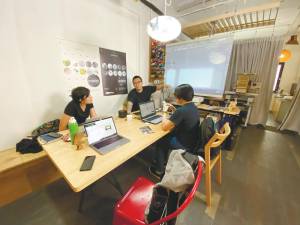 On a Venn diagram, the maker culture can be found where the do-it-yourself and hacker cultures converge. What makes makers different from traditional craftsmen – such as carpenters or tailors – is their use of technology to create, as well as to tinker.

The maker culture in Malaysia is very niche. Although you may not know of them, chances are you have heard of single board computers, 3D printers, and laser cutters. These are all common tools for a maker.

“The maker movement in Malaysia is more or less the same as around the rest of the world, as it came here from the West. But when it came to Malaysia, some of the things became more localised.

“When we talk about the pioneers of the maker movement in Malaysia, they tend to come from an electronics or engineering background,” said KC Tan, one of the proprietors of FabU Cafe, a fabrication, maker space, and cafe in Petaling Jaya.

The term “maker space” refers to a sort of communal workshop where makers can gather, exchange ideas, solve problems together, and share high-value tools that they might not have, or have yet to invest in, such as 3D printers or laser cutters.

“But, lately, there have been more makers who do not come from a tech background. For example, they come from an art background instead,” said Tan.

These new makers, he added, tend to be students from colleges nearby who have art, designing, or architectural backgrounds who are looking into digital fabrication, or who incorporate technology into their projects.

“The barrier to entry is not high, but people feel that it is difficult to be a maker if they are not from the field professionally. The thing is, to create using technology, you tend to need a higher than average computer literacy,” said Tan.

“It can be difficult unless they know someone in the maker community, and that is what maker spaces like FabU Cafe are for,” said Tan.

As a maker space, FabU Cafe also offers the use of aforementioned machines and tools along with basic guidance, a community of enthusiasts who are more than willing to help, along with workshops and digital fabrication services – and some much-needed coffee.

“If someone wants to be a maker, or start using technology to create, the best thing they can do is actually visit a maker space and meet people there,” said Tan.

“Maker spaces are usually run by enthusiasts, we do this because of our passion, we want to get our hands dirty and make things, so to speak. So we are always more than happy to share our knowledge.”

“A lot of Malaysian makers out there are doing a lot of interesting and cool stuff, but they don’t document or share them with others openly. So it undermines the maker movement here.”