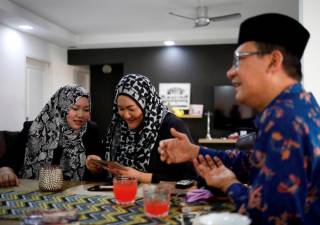 IN THE modern republic of Singapore, several seemingly ordinary people working in offices or driving taxis can claim to be of royal blood, descendants of a 19th century monarch who ceded control of the Southeast Asian island to the British.

But few residents in one of the world’s most cosmopolitan cities are even aware of this lineage, a sore point with Tengku, or Prince, Shawal, acclaimed by some members of his family as ‘head of the house of Singapore’.

“They still exist?” is a response the 51-year-old says he often receives when he tells people he is one of the descendants of Sultan Hussein Shah – whose treaties with the British led to colonial rule and the founding of the modern country.

Shawal is one of several Singaporeans who bear the honorific name Tengku, meaning prince or princess in Malay, and claim links to the Sultan.

Until the turn of this century, some of them still lived in their ancestral home, a crowded, dilapidated palace, before they were evicted by the government which turned it into a museum.

Seventy nine descendants, of whom 14 were living in the palace, were offered payouts as part of colonial-era deal to provide for the Sultan’s family, the government said at the time. Many of the others were living overseas, it said.

The legal beneficiaries’ names were not made public, making it difficult to verify royal claims.

The Singapore government, which has ruled unbroken since the city-state’s independence in 1965, told Reuters that all but one of the payments have been made but it was unable to share more details on the beneficiaries.

Shawal, who showed Reuters government correspondence identifying him as a beneficiary, still regularly visits the palace-cum-museum and its nearby mosque and cemetery in the city-state’s Malay heritage enclave called Kampong Glam.

Despite facing personal issues with his income cut and his logistics job at risk due to the coronavirus pandemic, Shawal says he devotes time to keeping the Sultan’s heritage alive by dressing in traditional royal costume and attending celebratory events.

But gaining wider recognition is a challenge, even among a disparate and somewhat divided band of claimants.

Other descendants warn about the dangers of living in the past or are too preoccupied with hardships of the present.

“We are not a dynasty. It is not important whether you are a descendant of the royal family or not,“ said Tengku Indra, a 67-year-old consultant who lived in the palace grounds as a child.

“What is crucial is you must earn your life through meritocracy instead of enjoying an ascribed status based on ancestral position.”

Indra was described as the great-great-great-great grandson of Sultan Hussein in an article by government-affiliated heritage society Friends of the Museums Singapore last year.

Indra’s son, 40-year-old businessman Tengku Azan has a two-year-old daughter who would be one of the youngest descendants.

He thinks future generations will not take much interest in the Sultan’s history. “The past inadvertently takes a back seat and remains uncherished,“ he said.

For other former palace residents, life in the outside world has been a rude awakening.

Tengku Faizal, 43, said after he left the palace in 1999 he took a job as a cleaner in a condominium and would get teased for being the prince who handles garbage.

He now drives a taxi but says he is struggling to make ends meet and has been given financial assistance to cover his daughter’s childcare fees. To help out, his wife has taken a part-time job in a McDonald’s outlet.

“We are not smart, we are not rich,“ Faizal said, speaking in English. “We got title only.”

Of seven Singapore claimants Reuters interviewed, Shawal was the most eager about celebrating his heritage.

But even he had his own doubts about passing on the “burden” of the royal title and did not give it to his daughter at birth.

Now 27 and working for a biotech firm, Princess Puteri has reclaimed her Tengku name but says she also finds explaining her credentials an uphill task in a country that has largely forgotten this piece of history.

“Some part of me feels sad because I need to explain who I am. But the moment when they look at Prince Harry they know he is the prince,“ she said, referring to the globally popular grandson of Queen Elizabeth II.- Reuters

ByINTERNATIONALLY renowned award-winning producer, mixer and musician Alvin Wee has been based in California for years. The last time the Sarawak native was back...
Read more