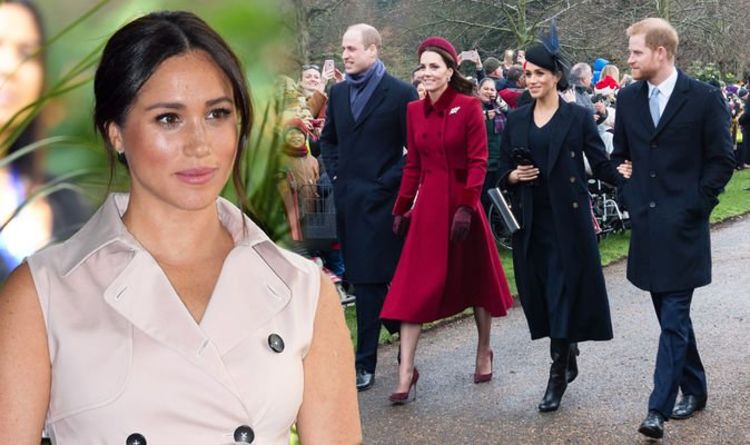 Meghan Markle became part of the Royal Family when she married Prince Harry, 35, in 2018. She became the sister-in-law of Kate Middleton and all eyes were on the Duchesses whenever they stepped out together. What does their body language reveal about their relationship?

When Meghan Markle married into the Royal Family, she began to take on official duties.

This meant she would occasionally make appearances with Kate Middleton, Prince William, 37, and Prince Harry.

However, the body language between the Duchesses show they could have actually been covering up another royal issue.

READ MORE: Kate Middleton heartbreak: Is the Duchess close with Prince Harry after royal ‘step back’?

Judi said: “When the first rumours of rifts between the ‘Fab Four’ first surfaced it was assumed any animosity was between the two wives.

“This means they provided what might have been an unwitting smokescreen to prevent royal fans spotting the far more traumatic problem between the two previously close brothers William and Harry that was unfolding quietly but agonisingly in the wings.”

While many royal fans assumed a fallout between Kate and Meghan, these rumours could have been covering up other conflicts.

Judi explained the tension was more apparent between their partners, Prince William and Prince Harry.

This was most clear when they were spotted out together at a service marking the centenary of WWI Armistice in November 2018.

“One of the last sightings of the ‘Fab Four’ together in public and the frost between the two men looked undeniable,” the expert suggested.

“Kate and Meghan adopted very mirrored poses and Meghan’s smile as she stood next to Kate did reflect her signature upbeat approach at the time.

“However, there appeared to be little spontaneous chat or even eye-connect between Kate and Meghan here as the tension between the two mean appeared to have a very sombre effect on Kate’s body language.”

Despite rising tension between the royal brothers, Kate and Meghan appeared to have had no serious issues with their relationship.

In fact, Kate made an effort to welcome Meghan into her royal role, according to her body language.

Judi added: “Kate’s approach to Meghan never looked anything but conciliatory even though there were few signs of a genuinely close, relaxed ongoing friendship between the two women.

“In terms of signals of authentic affection there were more tactile rituals of what looked like fondness between Meghan and Camilla.

ByWe’re sifting through the sales to uncover what really is a bargain to give you a stress-free Black Friday 2020. Plus we’ll be getting...
Read more
Lifestyle