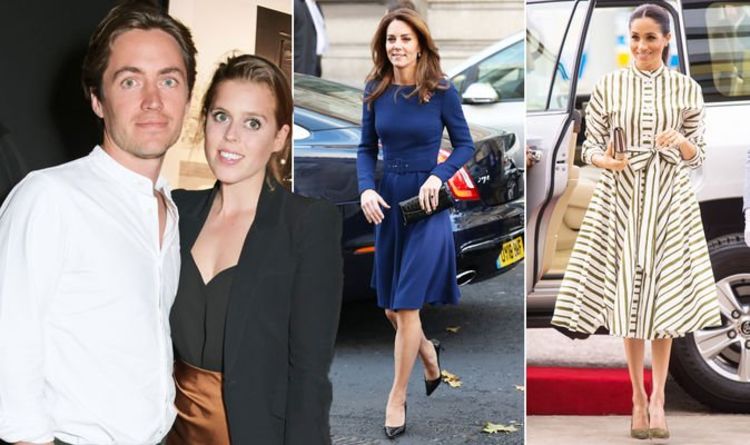 He said: “The Queen is known for her chic and vibrant wedding outfits.

“The monarch wore a lime coloured patterned dress for Harry and Meghan’s wedding and lemon yellow for William and Kate’s.

“We can expect an elegant outfit from the Queen – a bright coloured coat dress is most likely, making her stand out from the crowd.”

Who: His Royal Highness Prince Harry and Meghan Markle (now the Duke and Duchess of Sussex)

Dress: Meghan wore a dress designed by Clare Waight Keller for Givenchy. The white dress was made of silk and had a boat neckline. The veil was an incredible 16 feet long.

Tiara: The Duchess of Sussex chose the Queen Mary diamond bandeau tiara, made in 1932, with a flower brooch in the middle from 1893.

Cake: The cake was a made by Claire Ptak, based in London. It was lemon and elderflower cake, decorated with peonies and buttercream icing.

Who: The Duke and Duchess of Cambridge

Dress: Kate wore a dress made by Sarah Burton for Alexander McQueen. The satin gown featured long lace sleeves. It had a nine foot train and the lace featured roses, daffodils, thistles and shamrocks.

Tiara: Kate borrowed the Cartier Scroll Tiara, now known as the Halo tiara. It bought by the Queen’s father, the future King George VI, for his wife Elizabeth.

Cake: William and Kate opted for a traditional fruit cake with eight tiers. It was decorated with sugar flowers. William also had an additional chocolate biscuit cake was made from a Royal Family recipe.

Notable guests: Guests included family and friends of the couple, as well as members of the military and people who work with charities the pair support.

How to get rid of mice: Mrs Hinch fan shares top tip to prevent mice in the home

ByMice are not dangerous to health, but they can spread disease through their saliva and nesting materials. With winter just around the corner, mice...
Read more
Lifestyle

ByIvanka Trump, daughter and senior advisor to Donald has been Melania’s stepdaughter since the couple married in 2005. Melania is the stepmother of the...
Read more
Lifestyle