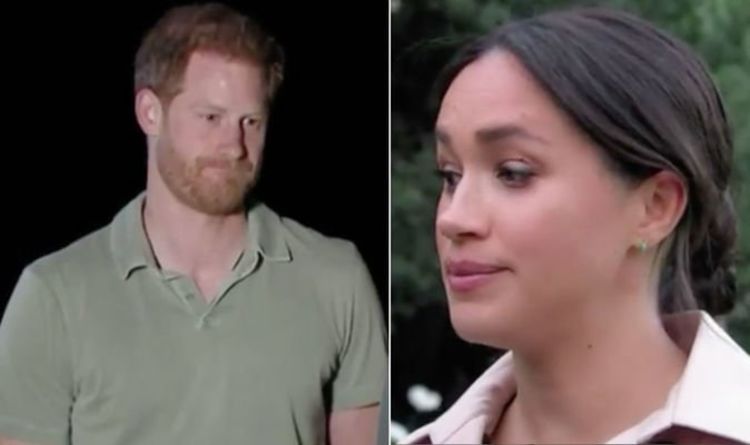 Meghan Markle, 38, and Prince Harry, 35, spoke about a range of topics on the ITV documentary “Harry & Meghan: An African Journey”. Harry responded to questions of a rift between himself and his brother, Prince William – and did not deny the speculation that the two are not as close as they once were. He said: “Part of this role and part of this job and this family being under the pressure that it’s under. Inevitably, you know, stuff happens. But we’re brothers. We’ll always be brothers.

Meghan, meanwhile, revealed she said the couple were “existing, not living” under the media glare.

Interviewer Tom Bradby asked how Meghan was coping with the scrutiny that comes with being a royal, and getting emotional, she said: “Look, any woman especially when they are pregnant you’re really vulnerable and so that was made really challenging, and then when you have a new born – you know…

What did their body language reveal about how the couple are coping with the spotlight? Judi James, body language expert, shared her insight exclusively with Express.co.uk.

Judi said: “It would have been hard to not have been touched by the powerful emotions on display during this documentary, mainly the inspiring, brave expressions on the faces of children that had lost limbs in landmine explosions and girls stoically learning to box in the face of threats of kidnap and rape.

“We saw very open emotional displays from Harry and Meghan too, especially the ones of a sense of constant tenderness for each other and their baby son Archie.

“When Meghan spoke with passion about her causes Harry could be glimpsed in the side-lines, cuddling his small son like a besotted dad, and Meghan would rush over to stroke, kiss and bend over them, walking away stroking Harry’s back in rituals that suggested mutual support and empathy.”

“His responses appeared to range from quiet sadness and grief to a desire to protect his family.

“His gestures when he spoke about his causes ranged from chest-beating passion, hitting a splayed hand across his chest, to the kind of precision gestures, like a finger-pinch or an ‘invisible brick’ gesture, to suggest more forensic thinking when it came to getting results for the various causes and charities.”

Moving on to Meghan, Judi said: “Meghan was incredibly eloquent making her own points about her causes, but when asked about her emotions in response to the personal pressure she is under we saw her smile become more difficult to sustain and her eyes widen to suggest vulnerability behind the royal smiles.”

While the documentary touched on the tougher moments for the couple, they also revealed some sweet elements to their relationship.

The Duchess of Sussex revealed the nickname she uses for her husband. She said: “I said for a long time to H, that’s how I call him, there is no point in just survive something – that’s not the point of life. You’ve got to thrive and feel happy.”