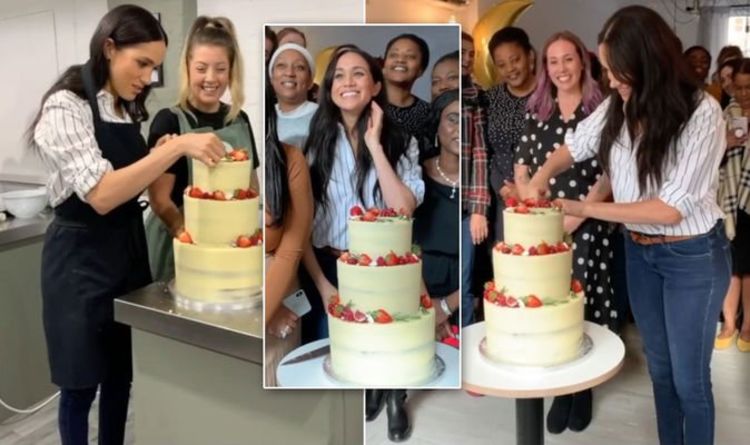 Meghan Markle, 38, smiled as she met with women from the bakery and cut a spectacular cake. Luminary Bakery were celebrating the opening of their new venue, and the Duchess popped along after shining a light on the business in her groundbreaking Vogue issue earlier this year.

Sharing a video of her visit to Instagram, Meghan’s team wrote: “Earlier this week The Duchess of Sussex visited the women of @LuminaryBakery as they celebrated the opening of their new location.

“It was a special moment to acknowledge the spirit of Luminary and their remarkable business model that opens its arms to women from vulnerable circumstances (be it abuse, poverty, trafficking, marginalisation) and equips them with the job skills and confidence to succeed.

“Having sat down with @luminarybakery at their flagship location earlier this year and from that inspiring visit choosing to feature them as #ForcesForChange in the September issue of @britishvogue, Her Royal Highness was proud to be invited to attend the launch of their second bakery.

“This addition will enable the organisation to provide services, support and mentoring for four times the number of women. Luminary Bakery – a sustainable grassroots organisation in the heart of London – is a beautiful example of community and uplifting those during hardship for the greater good.

“If you find yourself in the area, please visit and support the women of @LuminaryBakery to enjoy their delicious baked goods and to see the impactful work they’re doing.”

She later moved on to roles in CSI, Without a Trace and Castle along with bit parts in Hollywood film including Get Him to the Greek, Remember Me and Horrible Bosses.

Their relationship began in October that year and just over one year later, on November 27, 2017, the pair announced their engagement. They married on May 19, 2018 at St George’s Chapel in Windsor Castle.