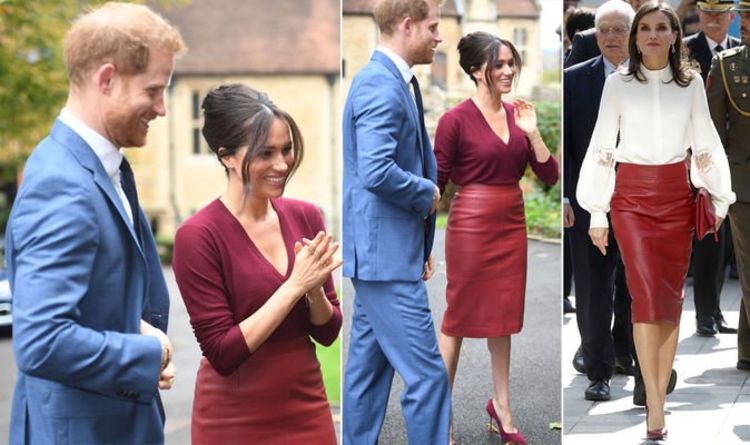 Meghan Markle, 38, and Prince Harry, 35, will join The Queen’s Commonwealth Trust and One Young World to look at how young leaders are driving meaningful change for empowering women. For the event, Meghan wore a red leather Selrita skirt from Hugo Boss, £369.

A body language expert looked at the footage, and also at the famed Martin Bashir interview with Princess Diana – fans had been drawing comparisons between the two.

Judi James, body language expert, said: “Harry quite understandably appears haunted by the experiences of his mother and worried his wife might suffer in the same way.

It is no surprise that Meghan has been inspired by Queen Letizia’s wardrobe, with the royal regularly gracing style pages thanks to her canny use of high street and designer, mixed with the lavish royal jewellery she has access to.

Meghan’s first television appearance in the USA was in an episode of the medical drama General Hospital in 2002. She later moved on to roles in CSI, Without a Trace and Castle along with bit parts in Hollywood films including Get Him to the Greek, Remember Me and Horrible Bosses.

Meghan was also a “briefcase girl” on Deal or No Deal – but her most famous role was as Rachel Zane in legal drama Suits, which launched in 2011. She was written out in the finale of the seventh series when her character got married, which aired in April 2018 – just before she got married herself.

And in June 2016, she met Prince Harry on a blind date set up by a mutual friend. Their relationship began in October that year and just over one year later, on November 27, 2017, the pair announced their engagement. They married on May 19, 2018 at St George’s Chapel in Windsor Castle.

But Meghan will be the first royal to openly embrace a mixed-race heritage. She has written about the difficulties of being a biracial actress in Hollywood as she claims she is not black enough for some roles and not white enough for others.