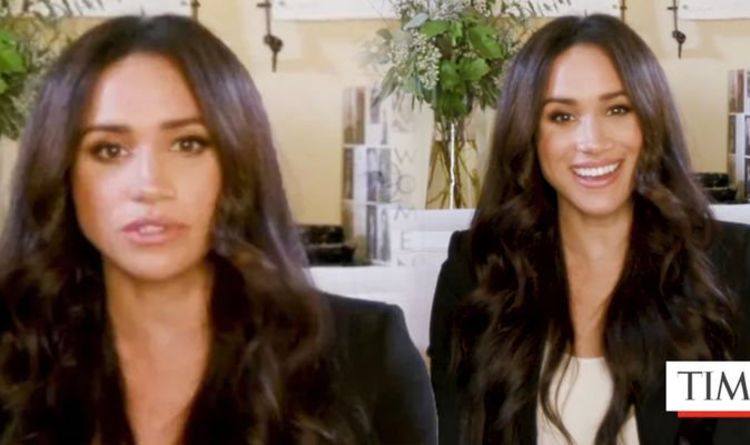 While doing a solo interview, the expert suggested Meghan was able to get across her genuine passion for making a change.

However, she also showed signs of “distress” and possible discomfort at some of the topics being discussed.

Judi continued: “Meghan displayed strong levels of passion for the subject under discussion, potentially based on her own experiences.

“There was a sense of tough-talk in the way she sat with one elbow extended, performing the kind of mouth shrugs and accelerated blink rate that told us she was totally on board with the themes being discussed.

“When the idea of online ‘vitriol’ was discussed she raised both hands to chest level, closing her eyes and almost wincing as she talked.

“Sitting beside Harry, Meghan again signalled her distress at some of the themes by placing her hands over her face and first pursing her lips before biting them.”

This reaction from the mother-of-one could have been prompted by her personal experience of the topics discussed, Judi suggested.

When the royal couple sat together, their body language showed some similarities.

“Meghan rested her chin on the knuckles of one hand as she listened to her husband and Harry echoed that gesture by performing a small beard stroke as he spoke. These both suggest they are working on a deeper level than they might have done as royals.

“One telling highlight came when Harry asked what individuals could do to change the world for the better.

“A guest speaker raised the idea of political involvement, suggesting the right people should get politically involved and run for office themselves.

“There was a frozen moment from the Sussexes which could have been caused by a time delay but then they both broke out in mirrored, cheek-rounded, beaming smiles that suggested a desire to look modestly enigmatic rather than allow any leakage gestures to hint that might be an objective of theirs.”