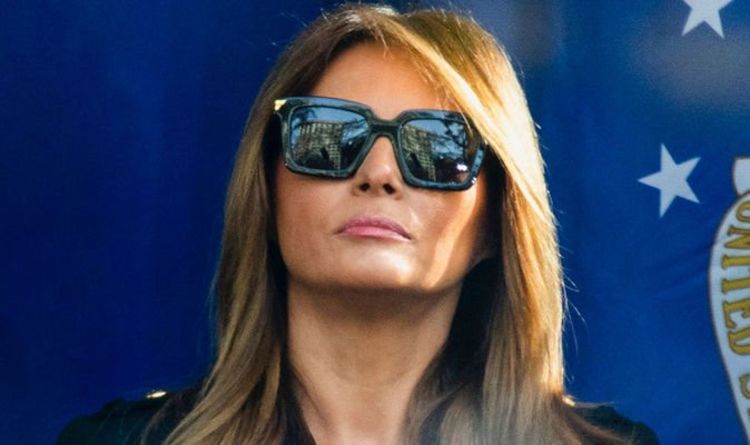 US President Donald Trump became the first sitting president to attend the New York City Veterans Day Parade on Monday, he was joined by Vice President Mike Pence and the First Lady. Trump was seen placing his hand over his heart during the playing of Taps, but Melania did not join her husband in doing this. Taps is a single bugle call played during a military funeral, memorial service or wreath laying ceremony.

According to protocol, all present not in uniform should stand at attention with their right hand over their heart.

Melania is aware of the hand placing as she was seen doing so during the playing of Taps during a 9/11 memorial service.

After the footage being posted on social media, many were quick to put the spotlight onto the First Lady to highlight her lack of hand placement.

One person posted on Twitter: “Melania Trump did NOT put her hand over her heart during the national anthem, on VETERANS DAY!”

Kathy Zambrano said on Twitter: “She didn’t even didn’t even put her hand over her heart yesterday during the national anthem.”

Nicole Hickman asked the First Lady: “Why didn’t you put your hand over your heart? Don’t you care about out veterans?”

Many attacked Melania by accusing her of not having a heart for not caring about veterans.

A Twitter user posted: “I was watching that morning; she did NOT put her hand over her empty place for her heart.”

Many felt the First Lady’s choice in clothing did not reflect the event.

Laura Tripp wrote on Twitter: “Did anyone else do a double-take on the placement of her “buttons”?

“I’m beginning to think she goes out of her way to wear something that causes reactions.”

One person added: “I’m pretty sure she thought dressing like a soldier was enough.”

Another wrote on Twitter: “Is Melania wearing a mock military jacket as if she’s attending a Halloween party?”

Some also attacked the First Lady for wearing sunglasses during the ceremony,

Dee Rose wrote on Twitter: “Take off your sunglasses and show some respect for Americans during a solemn ceremony.”

Bonita Kale claimed on Twitter how hand placement was “useless and silly, except for remembering which is your right hand”

They added: “The Trumps are creeps, but that’s not part of their creepiness.”

Despite the criticism, many took to social media to praise Melania and her work as the First Lady.

Gerda Spencer wrote to Melania on Twitter: “FLOTUS, Melania Trump, thank you very much for everything you do for the American People. “