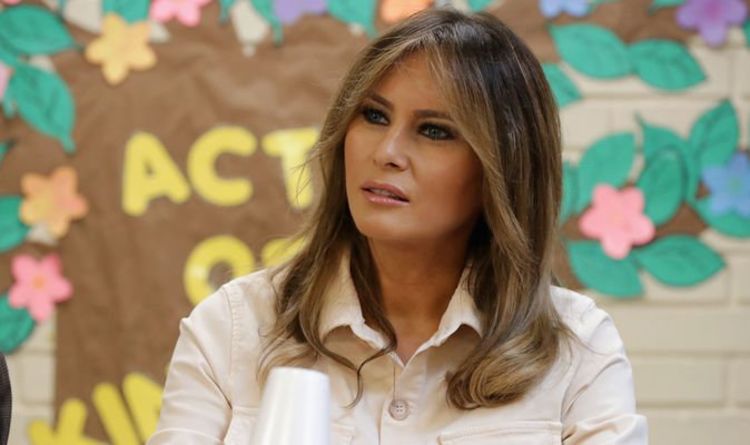 Ally was part of a group of youngsters invited to the White House to discuss the dangers of smoking. The event was organised by the Truth Initiative, the public health organisation that aims to end tobacco smoking. The group of nine students met with the First Lady in the Blue Room.

Melania, who wore a Bottega Veneta grey cap-sleeve dress, said after the meeting that “we need to be proactive” in fighting smoking.

Earlier in the week she delivered an anti-vaping message wearing a black Prada dress at the kickoff event Monday for the Drug Enforcement Administration’s Red Ribbon Rally.

The First Lady was particularly moved by Ally’s story and tweeted her support.

She wrote: “Ally’s courage to share her story can help save so many of her peers from starting the dangerous habit of youth vaping.

“Keep up the good work, Ally! Be strong & together we can help fight this addiction for children.”

True to form her tweet drew a storm of angry responses from social media users.

One user, fearing that a total ban on vaping might be in the pipeline, wrote: ”From one mother to another Melania, no child should be vaping, smoking or drinking alcohol. But its already illegal for them to do so.

One user tweeted: “So we’re rewarding children for breaking the law, while punishing adults for saving lives?

“When I got caught smoking, a trip to the White House wasn’t on my agenda, it was a paddle parade down the hall to my room.”

But the First Lady did receive one message of support from Michele, who wrote: “Thank you! Early intervention is crucial. Love what you’re doing for our youth.”

Ally had told the First Lady that she started smoking e-cigarettes when she was 14.

As a youth, she suffered from both physical and mental ailments, including heart palpitations and panic attacks.

Her friends told her that smoking e-cigarettes would help cure her anxiety.

But the vaping only made her worse, increasing her panic attacks.

She also claimed that smoking e-cigarettes led to her smoking tobacco cigarettes.

Eventually, at the age of 17, she summoned the courage to quit smoking altogether.

She claims that ever since she no longer suffers from anxiety, she can breathe normally and no longer has any heat-related issues.

The Barbers Hill student was delighted by the meeting and her chat with the First Lady.

She said: ”The trip has been extremely helpful because I didn’t think anyone was going to listen to little old me, a girl from a tiny town in Texas.

“To have other people that have gone through what I’ve been through and who want to put their voices together to get that message across was so empowering. I was with people who understand that this is a huge issue and that bad things have happened from it.

“They know it’s serious, they treat it as a real issue and that bad things have happened from it.”