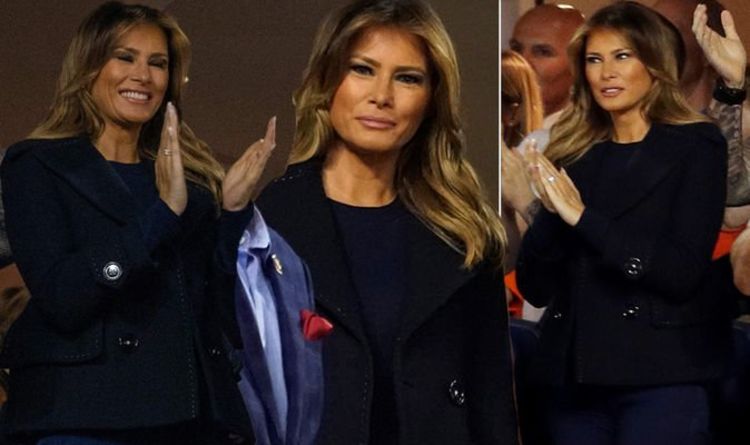 Melania Trump, one of the most stylish first ladies of all time, was photographed yesterday with Donald Trump at the fifth game of the baseball World Series in Washington, DC. Ditching her usual pristine and polished look, Melania opted for a more comfortable, chic and casual outfit for the game.

The fashionable coat is an on-trend item and was sure to keep her warm in the chilly afternoon in Washington,DC.

Pairing the item with some essential blue jeans and a navy cashmere jumper the First Lady was pictured clapping and smiling during the exciting baseball game.

Melania decided to wear her light brown locks down in loose waves, in her trademark style which fell around her shoulders and framed her face.

She also opted for a glamorous makeup look, with dark smokey eyeshadow, bronzed cheeks, and a nude glossy lip.

Coordinating with his wife, the outfit choice a clear nod to the official Washington National’s team colours, Donald Trump opted for an expensive-looking navy suit, a crisp white shirt and red and navy striped tie.

He decided to finish his look off with a proud display of the American flag in a pin on his lapel.

As the couple were recognised by the crowd at the game, Donald displayed a happy appearance as he smiled and gave a thumbs-up and a salute to the US military on the stadium’s video screens, however, the announcement over the speakers of the President and first lady’s appearance was met by boos and heckling by annoyed game attendees.

In some sections of the crown, there were chants of “lock him up”, along with banners such as “veterans for impeachment” and “impeach Trump”.

Recently Melania was pictured stepping out in the US Capital in Washington, DC in a chic light brown power suit.

She embraced autumnal fashion as she attended a meeting to mark the fitted anniversary of the signing of the Support for Patients and Communications Act.

Melania Trump: Facts about the First Lady of America

Who is the mum-of-one?

Melania Trump is a former supermodel and the third wife of US President, real estate tycoon and billionaire, TV star Donald Trump.

Melania Trump was born Menaija Knavs on April 26 1970, in Novo Mesto, Slovenia. Her father was a car dealer and her mother was a successful children’s clothes designer. She grew up in a modest household with her younger sister and later discovered that she had a half brother, who’s older from her father’s previous relationship.

Melania began modelling at age 16 and was signed by an agency in Milan when she was just 18 years old.  She mainly worked in Milan and Paris, before moving to New York in 1996. She worked with well-known photographers like Patrick Demerchelier and Hemut Newton and landed front covers on Magazines such as Harper’s Bazaar (Bulgaria), Vanity Fair (Italy), GQ (for which she posed nude in January 2000) and the Sports Illustrated Swimsuit issue.

Melania is said to be multilingual in the Slovanian, English, French, Serbian and German languages, however, other outlets report that the first lady can also speak Italian.