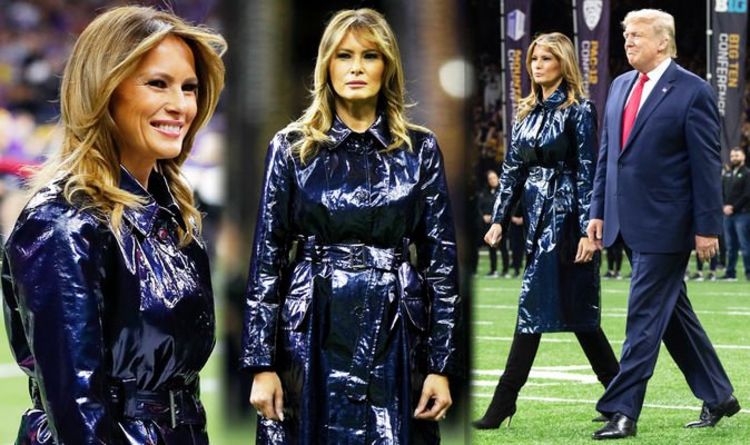 Melania Trump looked chic in a navy vinyl coat as she joined the US President, Donald Trump, 73. She was spotted holding hands with her husband wearing a shiny dark blue belted coat in New Orleans. The First Lady completed the look with a pair of killer high heeled boots and the outfit is thought to total £1,198.

The coat had a boxy style top and she stayed warm by wearing it buttoned up to the collar.

Melania showed off her slim waist with a chunky matching belt.

The long coat cut off at her knees and she covered up with a pair of knee high boots.

The black suede shoes had a high stiletto heel and a slouchy fit, reportedly from Prada, with similar pairs costing £930.

Before watching the game, Melania and Donald took to the field at the Mercedes Benz Superdome.

She wore her highlighted locks down and styled into a middle parting with a slight curl at the end.

The First Lady opted for her signature glam makeup with a slick of bronzer and smokey eye.

Melania kept her jewellery simple and her lavish diamond engagement ring could be seen.

She opted for a sparkly black and gold sleeveless item that had a high neck.

The floor length dress was covered by gold glitter at the top and was completely black at the bottom.