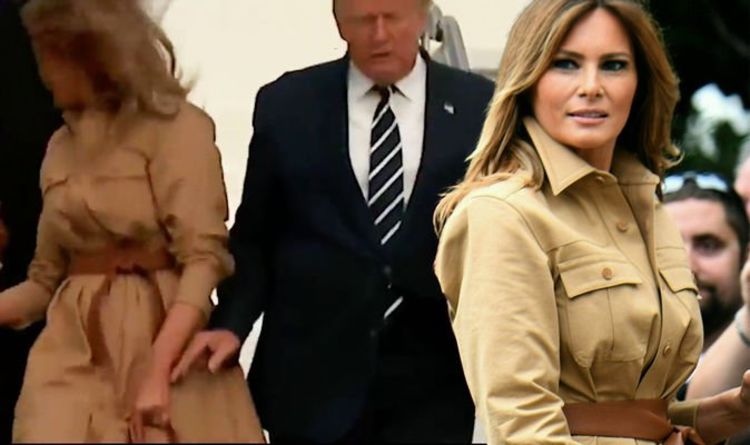 The subtle movement made headlines as critics wondered why Melania might be avoiding her husband’s gesture.

However, others thought her full-skirted dress may be to blame, as she appeared to hold her leather handbag tightly against her A-line dress in the wind.

“It was windy. She’s just holding her dress down. Once off the stairs she holds his hand,” insisted one Twitter user after the clip caused a social media storm on Monday.

Aside from the awkward moment, Melania looked in good spirits as she smiled at a small group of welcoming supporters, despite the news that her brother-in-law, Robert Trump, had passed away on Saturday.

Showing off more fashion hits from her designer wardrobe, Melania was dressed top-to-toe in camel-coloured tones that perfectly complemented her caramel-streaked hair.

The First Lady was wearing a statement shirt dress with long sleeves and a flattering hemline.

The neutral-coloured Compact Cotton Shirt Dress was by British designer Stella McCartney, which has already sold out online.

Maids of Honour tarts were apparently named by King Henry VIII himself! It is believed they were first made at Hampton Court Palace in the...
Read more
Lifestyle

Monty Don has become a gardening and broadcasting legend. For 17 years he has transported the best tips and tricks of the trade to...
Read more
Lifestyle

Photos of the sitting were shared on the Royal Family's official Twitter account and the process was live-streamed to charity supporters and guests. A body...
Read more