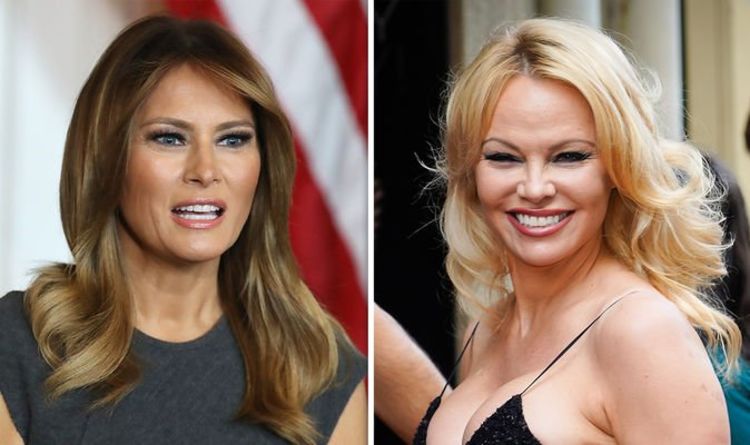 Yesterday, the famous Baywatch actress posted a photo of herself and the couple at the now President’s birthday in 2005. In one of the pictures, Pamela is seen standing next to Donald as he gives a speech at his party.

In another, the three are all pictured with the Donald standing in between the two.

Accompanying the photo, Pamela tweeted, “Once upon a time”.

However, fans of the actress quickly attacked the star for being pictured with the two.

Another wrote in response: “Pamela. What were you thinking.”

A third person wrote underneath the tweet: “You were the coolest girl, even in Holland and we have lots of cool girls, so struggling a bit with this photo.

“Not that I know Trump personally, but as a President, he is, well, quite bad.”

The responses continued down a similar trend where users questioned why Pamela would pose with Donald and his wife.

JUST IN: Melania Trump fury: FLOTUS reveals the one thing she finds hardest

In the letter, she asks for him to take action on her behalf and help her friend, Julian Assange.

Moreover, she also said how the two “complemented each other extremely well”.

In the letter, she wrote: “I am always enlightened and encouraged when I see the great work that you both have achieved during your period as the leading couple.

“You compliment each other extremely well, Mr President with your personal touch and emotional flare that strikes a chord with the people, together with the enduring poise and presented dignity that the First Lady upholds.”

“Integrity was certainly the underlying thread that defeated Hillary and brought to the world this great couple, cannoning you into the most powerful position in the world.

“The people trusted your intent and your judgement because and it was supported by the free press during your campaign.

“Recalling that it was the free press that in effect stifled and dominated over the fake news rubbish that was so desperately trying to derail your great and successful campaign.”

Recently, the President and his wife attended the Veterans Day parade in New York.

Cutting a sombre figure, Melania dressed all in black as she looked on at the veterans.

Following the event, Melania posted a picture on her Instagram account of the day, where she said: “We remember & honour our men & women in uniform who defend our freedoms & protect our Nation. God Bless our Veterans!”