Melania Trump shows off her model figure in chic power... 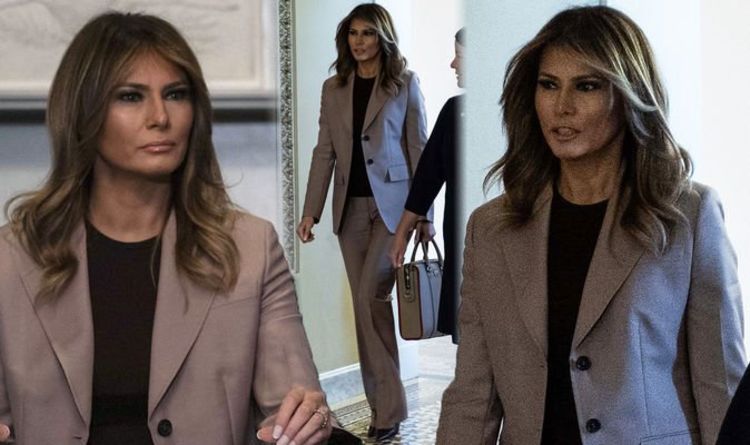 Melania Trump dressed in office chic as she wore a light brown power suit as she stepped out in the US Capitol in Washington D.C. The US first lady embraced autumnal fashion as she attended a meeting to mark the first anniversary of the signing of the Support for Patients and Communities Act. She opted for muted tones in a fitted beige suit as she attended the meeting without Donald Trump. Melania dressed up the look with a pair of black patent high heel shoes and stylish leather handbag.

When she steps out, the president’s wife will often show off her stylish wardrobe.

She was spotted wearing a suit blazer which had large lapels, two black buttons and a pocket on each side.

It had a fitted style and she wore it open over a scoop neck black fitted top.

The top was pulled down over a pair of matching brown fitted suit trousers.

In her hand, she carried a stylish cream leather oversized handbag which had gold detailing.

She wore her light brown locks down and styled into a loose curl.

She was spotted speaking at the meeting as she sat on a panel next to White House Counselor Kellyanne Conway.

The former model has been the first lady of the United States since Donald Trump was inaugurated in 2017.

Last week, Melania showed off her strong style in a grey dress and pair of snake skin high heels.

She wore the ensemble as she appeared at an event at the White House to talk about her Be Best campaign.

The Slovenia born has lived in the US for 20 years, but when did she get citizenship?

After moving to Manhattan to work as a model in 1996, she was living on a tourist visa before she obtained a H-1B work visa.

Melania then made a bid for permanent residency in 2000, just two years after meeting Donald Trump.