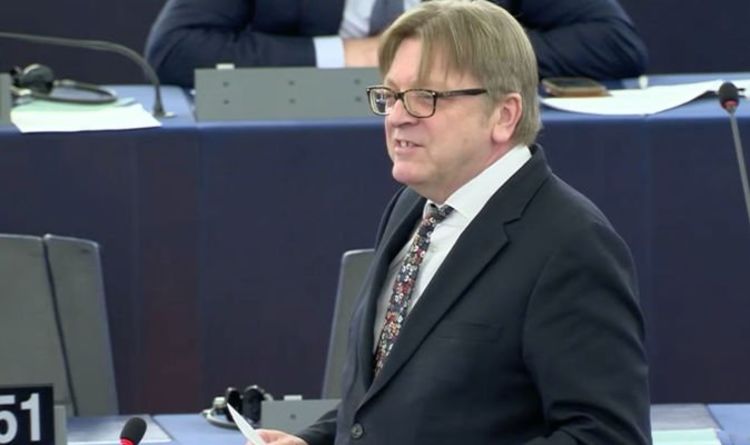 The motion, put forward by Brexit co-ordinator Guy Verhofstadt, expresses “regret” at Boris Johnson’s decision reclaim control of the UK’s immigration system. It adds: “The future relationship between the EU and the UK should include ambitious provisions concerning the movement of persons. Free movement rights are also directly linked to the three other freedoms integral to the internal market, and have a particular relevance to services and professional qualifications.”

Conservative MEPs sparked fury after refusing to oppose the resolution during the vote in Strasbourg.

Six of the Government’s Euro parliamentarians – including new recruits Lucy Harris and John Longworth – abstained in the ballot.

A total of 592 MEPs supported the resolution, while it was opposed by 69.

Brexit Party MEP Rupert Lowe said: “I shall certainly not miss this sabre-rattling from Mr Verhofstadt. The man sounds like a broken record and his EU fanaticism has only enforced Eurosceptic opinion in the UK.

“Under EU rules our immigration system is unjust, unfair and unfit for purpose. It was a driving force behind our referendum win and anything less than full control post-Brexit would be a total betrayal.

“A Conservative U-turn on this issue is worrying, albeit not surprising. If the Tories think they can return to the pathetic surrender of the May era without criticism then they are sadly mistaken. Myself and many other Brexiteers will be watching closely, ready to expose any backsliding.”

The Prime Minister is accused of creating “anxiety” in recent months, the text states.

The resolution “expresses its concern” with the Independent Monitoring Authority, a citizens’ rights watchdog.

MUST READ: No chance! Irish MEP vows to vote against Brexit deal in EU Parliament

His motion adds: “The lack of such physical proof will further increase the risk of discrimination against EU27 citizens by prospective employers or landlords who many want to avoid the extra administrative burden of online verification.”

Yesterday the former Belgian prime minister told MEPs that he was fearful that purely digital records for EU citizens permitted to stay in the UK could cause problems for those trying to prove to bosses or landlords they are legally entitled to remain in the country.

Brexit Party MEP Alex Phillips said she wanted to see an end to preferential access for EU citizens in the name of “fairness, not favouritism”.

ByNevertheless, we want to give our readers the chance to remain spooky with our bespoke Halloween masks giveawayYou’ll receive three of our most spine-chilling...
Read more