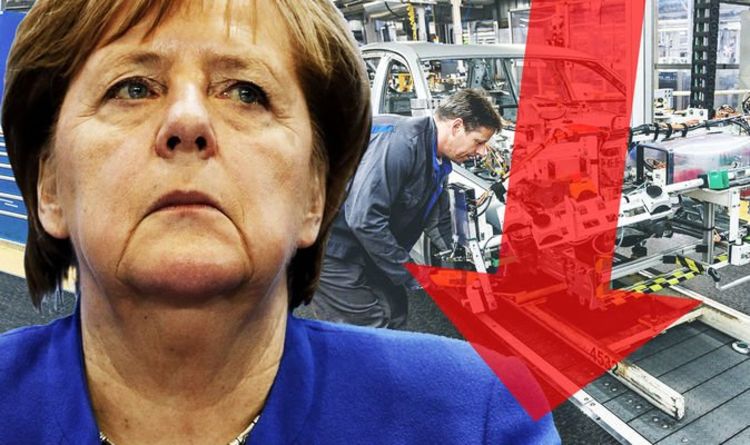 The Association of German Chambers of Industry and Commerce (DIHK) has found exports to Britain fell by £2.5billion (€3billion) to £62billion (€73.6billion) in the first 11 months of 2019. The damning figures represents a four percent decline compared to the same period in 2018. Eric Schweitzer, President of the DIHK has described Brexit as a “historic turning point” for German business.

The UK will finally exit the European Union in just four days time on January 31, before entering 11 months of trade negotiations in the transition period.

Mr Schweitzer said the next 11 months will “reduce the pressure” for German businesses but conceded the “economic upheavals” are already being felt today.

He said: “The UK’s exit from the EU is a historic turning point for German companies.

“The transitional phase until the end of the year will reduce the pressure somewhat for German companies, but the economic upheavals are already visible today.”

Prime Minister Boris Johnson has secured Brexit for the January 31 deadline, but several EU officials have cast doubt over the timetable for a trade agreement by the end of the year, when the transition period is set to end.

With the prospect of further uncertainly, Mr Schweitzer has warned there will be “negative consequences” if a deal is not agreed by the end of the year.

The trade chief has said there must be a breakthrough in future economic relationships “otherwise there will be negative consequences for companies on both sides of the channel”.

He added: “To achieve this, a basic agreement is necessary by the end of the year – to avoid customs duties and to further enable supply chains, data traffic, smooth goods traffic and services.”

In London this afternoon, the Prime Minister reiterated the UK would not seek to delay the transition period beyond December 31.

Mr Johnson insisted it should be possible to “wrap all this up” by the end of the year.

He said: “We will be doing things very fast, very friendly and respectful way, and in a way also, I think it’s important to stress, that really ensures we look after the interests of the Republic of Ireland as well.”

“But there should be no doubt that we are on ‘Team EU’, we are part of the 27 and maintain solidarity with all the member states and European institutions that showed solidarity with us over the past two or three years.

“I think if you see this as a contest, the European Union is in a very strong position – we’re 27 countries, we have a population of 450 million people and the single market is the largest economy in the world.

“But I don’t think we have to see it as a contest. There is a possibility for us to work together with the United Kingdom over the next few months and come to a future relationship and a trade agreement that’s mutually beneficial, and that’s the spirit in which we will be entering these talks.”