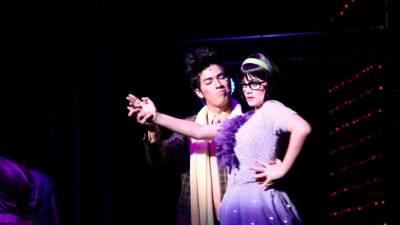 AWARD-WINNING actress and singer Stephanie Van Driesen made her mark in the Malaysian theatre scene with her riveting performances as Sally Bowles in PAN Productions’ Cabaret, Betty in The Secret Life of Nora, and as Marilyn Monroe in her one-woman show Marilyn & Me.

In 2017, she pursued her Master of Fine Arts in Acting at the East 15 Acting School of the University of Essex, in the United Kingdom.

She is also an accomplished voice over artiste and a former radio announcer, and she even launched her debut album Melbourne in 2019.

Van Driesen is also the founder and CEO of SFA Stage Crafts, a company that provides training programmes to business leaders.

We spoke to her recently on what she is doing now from her base in London.

Turns out that Van Driesen is currently working for a consultancy company that her friend started to meet the demands of PPE products.

“She (my friend) wanted to expand her sales team, and she called me to ask if I wanted extra work during this time, [which I agreed to] with the pandemic and everything. I have a title, Business Innovations Specialist.”

Essentially Van Driesen looks at trends and business technology that will move the business forward in a post-pandemic world.

“I have always had a side interest in business, and I have dabbled in it here and there,” Van Driesen explained. “It is another one of the hats I am trying on.”

She is also involved in the Glasgow production company, Car Crash Productions.

“I met the main person, Tom Sergeant, in drama school. He was in the theatre direction programme, he already had this production company in Scotland. What they do is a lot of outreach programmes for younger people, students and such, giving them exposure to the arts.

“Some of the productions are sent to the Edinburgh Fringe Productions. I graduated last year, and so did he, [and] he was looking to expand his team.”

Sergeant called up Van Driesen, and told her that he thought she would be a very good producer.

After all, she had helped another friend produce a one-woman show called Going Straight To Gay in February this year.

“It was a quirky one. My friend, an actress, wanted to try this hybrid theatre [genre] which was like stand-up comedy, but also a one-woman show. She was exploring the idea of what it was like to be in a gay relationship for the first time.

“It was very funny, with all the discoveries she was having with her family. I helped her get the audience and social media press [attention], and [also produce] her role. That was my first producing experience in the UK.”

Regarding her planned project with Sergeant, Van Driesen said: “We were supposed to produce something in May, but Covid-19 hit.

“Right now I am helping them produce things for online, and expanding our online audience through Car Crash Productions. So every month, we put up different things.”

When asked how the situation has been for her, she said: “ I wonder about that too. I really think [about] the fact that Covid-19 has made us immobile. We went through a major lockdown in the UK, and so did other parts of Europe.

“I had a part time job when I first came back to the UK last year with my new visa to stay here for five years.”

At the moment, Van Driesen is getting furlough payment, which is less than 80% of what she was originally making before the pandemic.

“I had to decide what I was going to do. My boyfriend’s family was like: ‘Why don’t you come live with us because it was going to be lockdown, and we don’t want you guys to be separated’. It was so sweet.”

Now with more free time, Van Driesen and her boyfriend Stephen Smith – who is also an actor and producer – teamed up and released two Facebook live shows in May (Within) and in June (The Tell Tale Heart).

“His brother was doing camera work, I was doing lights and sound. I also did a little music. We also got an online digital media award, OnComms Award twice for both shows. That helped with keeping us active.

“Otherwise you will end up feeling down. A lot of people are feeling really down and depressed, wondering what is going to happen next.”

Van Driesen believes it will take some time before the global theatre scene fully recovers.

“They have to suddenly adapt to going online like other businesses.

“What I am so afraid of now is that people are getting used to watching things online. I do think that when theatres open again, there are people who will want to go, but the strength and volume of people will take some time to recover.”