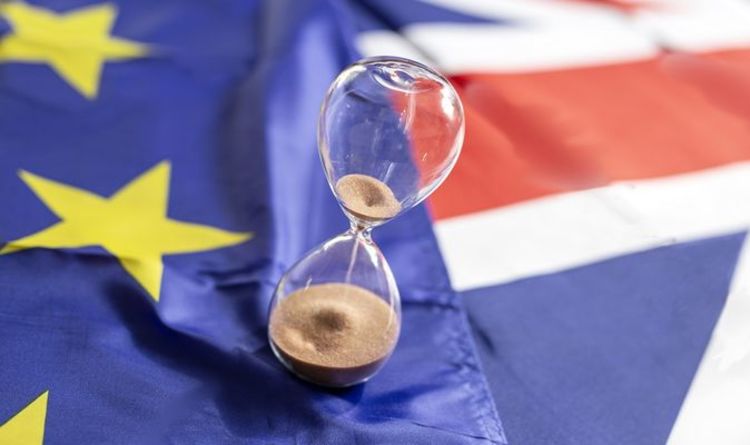 The escalation of the crisis saw widespread panic-buying across the nation – but Professor David Bailey, senior fellow with the UK in a Changing Europe think tank, said stores had been able to replenish stocks, thus preventing widespread shortages. And he suggested long-term contingency planning for a hard Brexit was likely to have helped mitigate the worst of the short-term impact. Referring the empty shelves which were a feature of his trip to Costco a few weeks ago, Prof Bailey said: “Such trends became increasingly common across the UK, as people took to stockpiling in case of having to self-isolate, and then in preparation for a wider lock-down.

“Shelves emptied, and supermarkets restocked as quickly as they could.

“The government helped by easing restrictions on deliveries, and have allowed stores to cooperate (which previously would have fallen foul of competition laws).”

He added: “So far there have been no major shortages. ‘There’s enough food for everyone’ has been the key line from store bosses, although this doesn’t mean that those in most need can access food.

“In recent years the supply chain for supermarkets has become a lean ‘just-in-time’ system operating on pretty much a three-week model.

“There isn’t much slack in the system to cope with sudden demand rushes.

“But so far the system has just about held up; retailers can see sales as they happen and place more orders. Manufacturers (food and drink is actually the UK’s largest manufacturing sector) have been able to respond quickly and get produce to distribution centres within days.

JUST IN: Eurozone in crisis – EU blasted for failure to act on coronavirus

“For example, in the run up to Brexit deadlines last year, warehouse space across the country was maxed out in anticipation of supply chain disruption in the event of no-deal outcome.

“While such Brexit buffer stocks were run down to a degree through 2019, firms have been able to draw on remaining Brexit stockpiles in keeping supply chains running in the current crisis – although that doesn’t mean that the stock is necessarily in the right place.”

One place where Brexit planning is definitely thought to have beneficial is the British overseas territory of Gibraltar on the southern tip of Spain, which is home to 32,000 people.

Speaking last month, Fabian Picardo, Gibraltar’s Chief Minister, said in a live address to residents of the Rock: “Preparing for an expected hard Brexit that has not yet materialised has prepared us well for these unexpected circumstances.”

An HM Government of Gibraltar spokesman later told Express.co.uk: “For many months we have been worst-case planning for a possible no-deal Brexit.

“These plans involved such issues as the stockpiling of medical supplies and the possible actions to be taken in the event of a less fluid frontier.