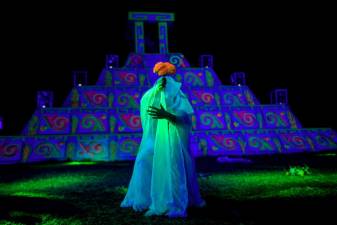 A DISCONSOLATE mother dressed in white wanders through Mexico City’s floating gardens looking for her children killed by the coronavirus, in a pandemic-era adaptation of a legend rooted in Aztec mythology.

The traditional play “La Llorona” (The Weeping Woman) returns to the UNESCO World Heritage Site of Xochimilco ahead of the Day of the Dead with a poignant tribute to the victims of Covid-19.

The ghost with flowing black hair, who according to legend reappears every year searching for her downed children, has spread throughout Latin America.

“It’s dedicated to the memory of all the people who left without saying goodbye to their loved ones and for all the families who have suffered this loss,“ Nayeli Cortes, who has played the role of the weeping mother for 11 years, told AFP.

Measures such as face masks made of transparent plastic or cloth and a smaller audience enabled the 27-year-old performance and its flamboyant costumes to survive the pandemic.

The coronavirus has killed 86,000 people in Mexico, one of the world’s highest tolls, and as in other countries kept people apart from their families.

“Not being able to hug, hold hands or kiss (relatives) is very frustrating and that’s why right now it’s dedicated to them,“ said stage director Maria Luisa Castillo.

“We know that they are here with us and it is the homage that we can give them, and also to tell them, ‘Here we are. We remember you. You will never be forgotten.’”

According to experts, the legend of the wandering ghost was first documented around 1550.

It is associated with supposed dire omens prior to the Spanish conquest that predicted the end of the Tenochtitlan empire 500 years ago.

The audience watched the show from the gondolas that ply the canals of Xochimilco, which usually attracts about a million tourists a year but was shut for almost six months due to the pandemic.

Hugo Cruz, a 46-year-old driver, said that it was important to keep the legend alive for future generations.

“If we don’t instill (the traditions) in our children then it’s going to be lost,“ he said.

“I think that we’re the only country that worships death in this way.”

The Day of the Dead, celebrated in Mexico on the first two days of November, is believed to be when the gateway separating the living and the deceased opens.

This year the festival known for its bright colors and elaborate costumes will be a more subdued, scaled down affair due to the pandemic.- AFP

ByBiography So you hate the cold. With coronavirus surging, restaurants and bars closed and the homes of even friends and family off-limits, does that mean your...
Read more