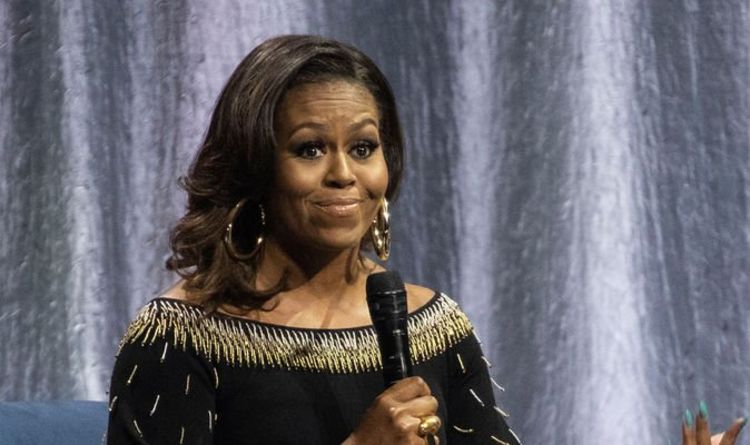 Mrs Obama showed up at Edgartown Public Library for their after-school programme. The unscheduled appearance occurred at around 4pm (9pm BST) on Friday. Speaking to Boston.com, library director Lisa Sherman said: “We were going about our normal business, and then a woman walked in and said, ‘Who would like to meet Mrs. Obama?’”

Mrs Obama is believed to have heard that the library was a fan of her recent memoir.

She was joined by her mother, Marian Robinson, personal assistants and secret service agents.

Circulation assistant Chris Look said: “It was a complete surprise.

“Everyone was really excited.

Ms Sherman added: “Out of all of the libraries in the world, she came to ours.

A recent Hollywood Reporter story put Mrs Obama and her husband Barack Obama in the top 50 most powerful names in entertainment.

The couple were in the list on a joint ticket.

This ranking puts the Obamas ahead of a host of big names including Margot Robbie, Will Smith, Phoebe Waller-Bridge, Scarlett Johansson, Quentin Tarantino and Brad Pitt.

The Hollywood Reporter explained: “Who wouldn’t take their call? The former president, 58, and first lady, 55, kicked off 2019 with a Sundance acquisition — documentary American Factory, which premiered to strong reviews on Netflix in August en route to an awards-season run.

“Tonia Davis and Priya Swaminathan, co-heads of Obama banner Higher Ground, are steering projects under the couple’s deal with the streamer — including adaptations of David W. Blight’s Frederick Douglass bio and Michael Lewis’ Fifth Risk, and Bloom, a post-World War II-era show about fashion — plus podcasts under a new deal with Spotify.”