Michelle Obama shock: Ex-FLOTUS reveals her most ‘devastating’ moment as... 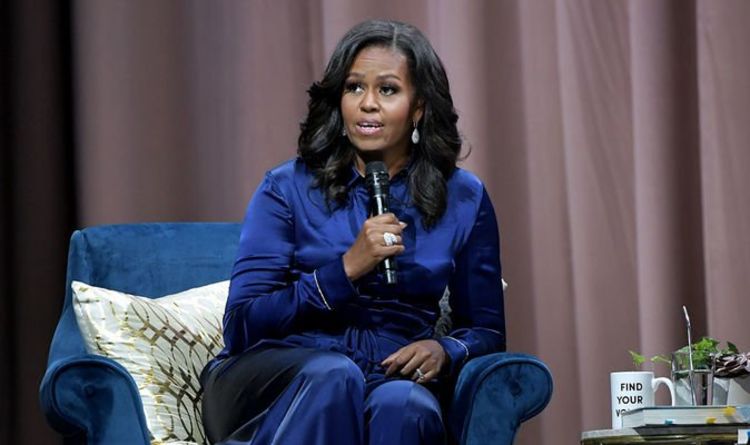 The former First Lady has always been candid about her time in the White House. Her bestselling memoir, ‘Becoming’ revealed a variety of insights into her life as First Lady.

In one particular moment from her book, Michelle revealed one particularly “devastating” moment that she struggled to come to terms with.

As First Lady, Michelle was expected to step forward and accompany her husband on visits to hospitals after mass shootings, or locations where members people had lost their homes due to natural disasters.

Michelle revealed in her first four years as FLOTUS she has “consoled often”.

She continued: “I’d prayed with people whose homes has been shredded by a tornado in Tuscaloosa, Alabama, huge swathes of the town turned to matchsticks in an instant.

“I’d put my arms around men, women and children who’d lost loved ones to war in Afghanistan, to an extremist who’d shot up an Army base in Texas, and to violence on streets corners near their own homes.

“In the previous four months, I’d paid visits to people who’d survived mass shootings at a movie theatre in Colorado and inside a Sikh temple in Wisconsin.

“It was devastating, every time.”

Michelle then revealed that she had always tried to be the most “calm and open” person that she could be.

Before driving to the school, he shot and killed his mother at their home in Newtown.

But Michelle said that two days after the shooting at Sandy Hook, she could not bring herself to join her husband Barack at a prayer vigil.

She revealed in her memoir: “But two days after the shooting at Sandy Hook, when Barack travelled to Newtown to speak at a prayer vigil being held for the victims, I could ’t bring myself to join him.

“I was so shaken by it that I had no strength available to lend.

“I’d been First Lady for almost four years, and there had been too much killing already – too many senseless preventable deaths and too little action.

“I wasn’t sure what comfort I could ever give to someone whose six-year-old had been gunned down at school.”

But Michelle revealed that instead she sought comfort from her children.