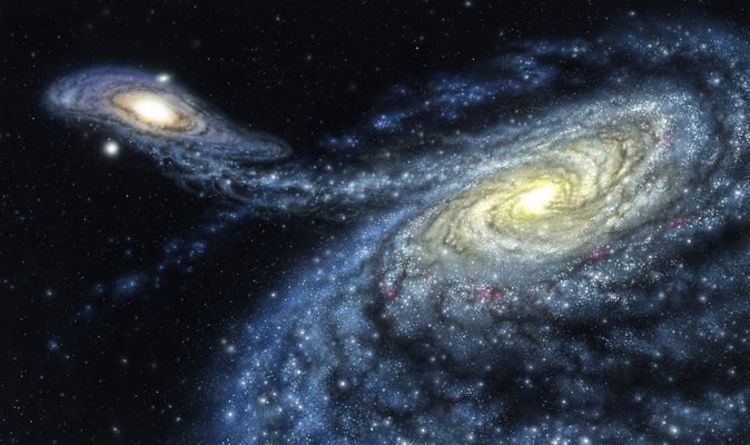 Nu Indi (HD 211998) is a star found just 94 lightyears from Earth and is visible in the night sky. And scientists have now discovered this star is from the early remnants of the Milky Way when our galaxy was consuming everything in its wake. Around 11 billion years ago, the Milky Way collided with a satellite galaxy known as Gaia-Enceladus (also known as the Gaia Sausage).

Gaia-Enceladus was the largest satellite galaxy ever consumed by the Milky Way.

When the merger happened, it knocked Nu Indi – which has always been part of our galactic neighbourhood – off its perch.

At the time, the star had only just formed, and was part of the Milky Way’s early history.

Data collected on stars includes what ingredients they contain, which would point to whereabouts they formed.

For example, a star packed with hydrogen would have been formed in a hydrogen-rich region of the Milky Way.

Nu Indi is metal poor, which would indicate it was not born where it is currently situated, in the southern constellation of Indus.

Using the European Space Agency’s (ESA’s) Gaia satellite, which is mapping the Milky Way, experts have been able to reconstruct Nu Indi’s movement across the galaxy.

Combining the mapping and 3D data with information from NASA’s Transiting Exoplanet Survey Satellite (TESS), scientists have been able to create a clear picture of Nu Indi, which is about three times the size of our Sun, but with only 85 percent of its mass.

Bill Chaplin, Professor of Astrophysics at the University of Birmingham and lead author of the study said: “Since the motion of Nu Indi was affected by the Gaia-Enceladus collision, the collision must have happened once the star had formed.

“That is how we have been able to use the asteroseismically-determined age to place new limits on when the Gaia-Enceladus event occurred.”

Co-author Dr Ted Mackereth, also from Birmingham, said: “Because we see so many stars from Gaia-Enceladus, we think it must have had a large impact on the evolution of our Galaxy.

“Understanding that is now a very hot topic in astronomy, and this study is an important step in understanding when this collision occurred.”