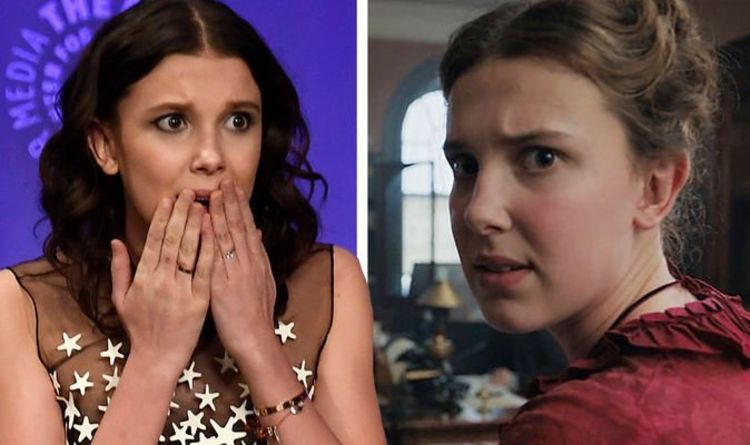 Millie Bobby Brown, 16, is a rising star in Hollywood and reached ultimate fame as Eleven in Netflix‘s popular sci-fi series Stranger Things. Like the rest of the cast her character, one of the main protagonists who has psychokinetic abilities, is American, something the British actress revealed made it difficult for future roles.

But changing back to a British accent hadn’t been all that easy.

“For the last five years I’ve been playing an American character in Stranger things and I found it really challenging being British in this, even though I am a Brit,” she said in a recent interview.

“I had to learn how to speak again because I’m so used to speaking in an American accent!”

The film, which is set to debut on the streaming site on 23 September, was a product of Brown and her sister, who were inspired by a young adult book series by US author Nancy Springer.

“The film was mine and my older sister Paige’s idea. We fell in love with Enola after reading The Enola Holmes Mysteries and so we went to my mum and dad, who own a production company, and said, ‘We’re so inspired by her. This needs to be a film.’

“My sister and I are producers as we felt it was only right to have girl power behind the scenes, too.”

The all star cast includes Henry Cavill as the tenacious Sherlock Holmes and Sam Claflin as Mycroft Holmes.

There have been several plays on how “Enola” backward spells “alone” which, as explained by Brown, will be a recurring theme for the independent-minded 16-year-old.

Speaking in recent a Zoom interview with Filipino and Singaporean journalists last week, she also noted that this film, her “masterpiece”, is her “coming-of-age” story.

“You know, this is a coming-of-age story about a young girl finding her purpose in life,” she said after revealing she felt she was missing out on opportunities due to her age, gender and experience.

“I’m 16 and I am very busy, it’s very hard to take that time to show myself self-love and self-care.

Line of Duty star Keeley Hawes, 44, is set to star in upcoming ITV crime-drama Honour, based on the murder of 20-year-old Banaz Mahmod...
Read more
Celebrity

Monty said: “I remember, when filming Around The World In 80 Gardens for the BBC, going down a side-tributary of the Amazon in a...
Read more
Celebrity

Jenna Lemoncelli Wendy Williams set the record straight about her relationship status after one fan claimed that she’s been teasing a new man on social...
Read more
Celebrity

Jenna Lemoncelli Mariah Carey reveals candid, new details about her past romances in her new memoir, ‘The Meaning of Mariah Carey.’ Take a look back...
Read more
Celebrity

Julia Teti Naya Rivera’s ex-husband, Ryan Dorsey, and her younger sister Nickayla showed one another compassion while at a Target, still processing the loss of...
Read more
Celebrity