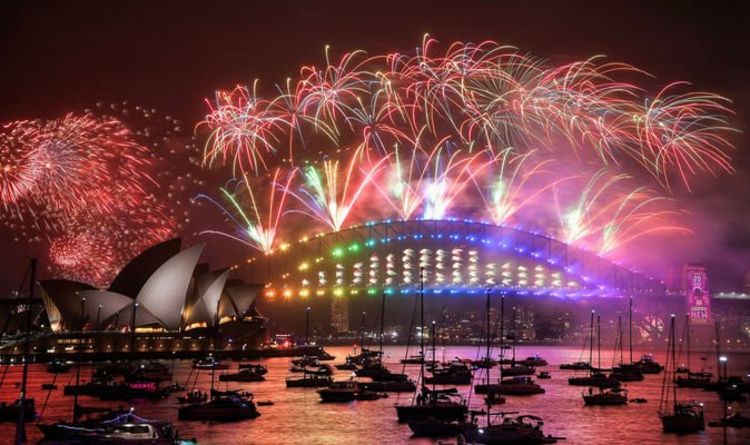 Moments earlier the bells of Big Ben, silenced all year due to renovation work, chimed to ring in 2020. In Edinburgh, a torchlit procession created a river of fire along the city’s Royal Mile, while Manchester, Cardiff, Newcastle upon Tyne and Nottingham all held mammoth displays. Earlier the New Year was welcomed in spectacular fashion in New Zealand – the first major country to ring in 2020.

In Auckland, a volley of rockets was launched from the 1,075ft Sky Tower – the tallest building in the Southern Hemisphere – during a spectacular display watched by tens of thousands.

An hour earlier, Samoa and Christmas Island in the South Pacific were officially the first nations to usher in the New Year at 10am UK time yesterday.

The clock struck midnight in eastern parts of Australia, including Melbourne, Sydney and Canberra at 1pm UK time.

Colourful rockets exploded over Sydney’s famous Opera House and Harbour Bridge at 9.15pm local time, with more than a million gathering to see them live and an estimated billion watching on television.

However, the celebrations were overshadowed by smog from bush fires which prompted more than 250,000 people to sign a petition urging city authorities to cancel the celebrations.

With 100 fires burning in New South Wales, the state’s fire brigade allowed the annual event to go ahead while many others were cancelled.

In Melbourne, more than 14 tons of fireworks were set off as part of the city’s Reach For The Stars celebrations, while Singapore marked the occasion with fireworks by Star Island.

Millions also took to the streets in South Korea and Fiji while Kim Jong-un allowed a fireworks display in the North Korean capital, Pyongyang.

Back in Britain, there was good news for revellers who ventured outside as the weather remained dry with temperatures hovering around 5C (41F).

The mercury fell to a chilly 1C in Scotland and northern England but it failed to dampen the party mood.

To ring in the new decade the familiar chimes of Big Ben were heard across the capital.

Since early 2017 the Great Bell, which is housed in the 315ft-high Elizabeth Tower at the north end of the Houses of Parliament, has stayed largely silent to protect workers’ hearing as it undergoes £61million of essential conservation works, due to be completed next year.

It last tolled on Remembrance Day on November 11.

But to ensure a perfect performance the bongs were tested on Monday and on three occasions before midnight.

The next time Big Ben will ring out is expected to be on January 31 – to hail the start of a new era for Britain as it finally cuts its ties with the European Union.