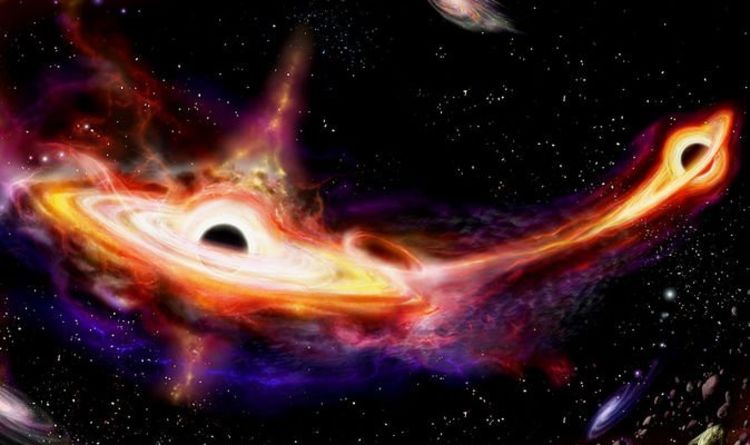 Described as “mind-boggling,” the collision involved two black holes so massive that their very existence challenges everything about how they form.

The discovery was made by astronomers at two observatories, LIGO in the US and VIRGO in Italy, using instruments that detect gravitational waves hitting Earth – ripples in the fabric of space and time predicted to exist by Albert Einstein more than a century ago.

Detailed analysis of the signals has now revealed the collision took place around seven billion years ago, meaning even travelling at light-speed, it has taken around half the age of the universe for the gravitational waves to finally reach the Earth.

Writing for The National last week, Visiting Professor of Science at Aston University, Robert Matthews, revealed exactly what they detected.

He explained: “Two black holes – objects whose gravity is so strong not even light can escape their clutches – spiralled into each other and created a brand new black hole.

“Dozens of such events have been detected before. What makes this event so special is the sheer size of the black holes involved – 66 and 85 times the mass of the Sun – and of their ‘offspring’.

“Until now, astronomers have believed such black holes were typically formed when giant stars run out of nuclear fuel and collapse under their own gravity.

“But calculations pointed to limits on the mass of such black holes. Stars around 65 to 135 times heavier than the Sun were thought to explode before they could collapse into black holes.

“The discovery of a collision involving at least one black hole in this ‘impossible’ mass range suggests astronomers will have to rethink their ideas of black hole formation.”

Dr Matthews went on to explain why this event challenges everything astronomers thought they knew.

He added: “A big clue comes from the aftermath of last May’s collision.

“According to the data, the two black holes merged to create an even bigger black hole around 142 times more massive than the Sun.

“This suggests that at least one of its ‘parents’ was itself the result of a previous black hole merger, rather than the collapse of a star.

“In other words, astronomers may have witnessed the birth of a ‘grandchild’ black hole.”

Amazon is about to reveal a bunch of new devices and they could make the Alexa-powered gadgets currently plugged-in at your house look massively...
Read more