Mindy Hammond celebrates her birthday with family and pets 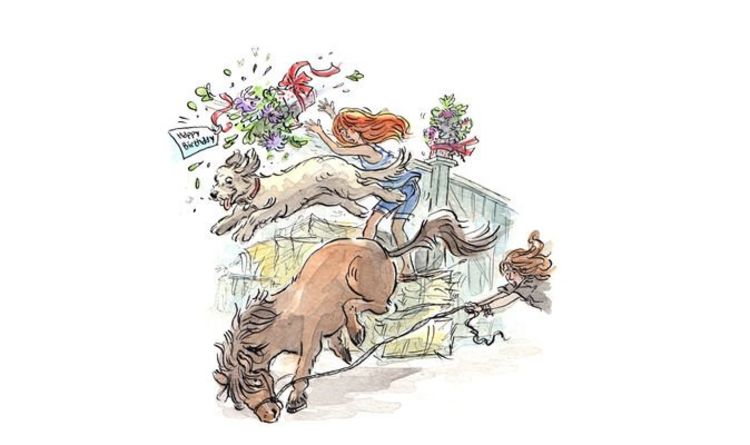 When Izzy and Willow asked me what I would like for my birthday a few weeks ago, the answer was easy. I was seeing my sisters before the event and Mum was visiting me the day after, so there was no call for an extended get-together. I didn’t need “stuff” but what I’d really, really like, they knew, was a lazy day.

I could sense Willow’s groan behind her smile. What 17 year old would relish waking at the crack of dawn? Possibly a few, if it was to muck out their own pony, but she’s a night owl and like so many of her age has a sleep pattern that sees her stumbling downstairs at lunchtime ready to eat her breakfast.

Izzy, on the other hand, was keen to work the morning shift. She’d been helping me for weeks and loves an opportunity to be in charge, so found it easy to persuade little sis.

Richard had to leave at 6.30am for work and although he whispered happy birthday before he left, hoping I wouldn’t wake, the sun had other ideas and sent blinding rays of golden light through the crack between the bedroom curtains.

I tried my best to stay in bed, but within 20 minutes boredom got the better of me and after letting the dogs out and slurping my coffee I couldn’t wait in the kitchen twiddling my thumbs any longer. I would just put the horses out and do Max’s stable – then the girls could do the rest. Half an hour later I went back to the kitchen to find both girls waiting for me, together with a pile of wonderful presents. We had breakfast then decided to finish the outdoor work together.

With one stable each to muck out, we whizzed through the job and Izzy was just about to put Musca out for his limited grazing time, when I heard a voice behind the yard gates. Ojo and Sparrow went berserk as usual and because the gates are eight-feet high and solid wood I wasn’t sure who it was. So I climbed on top of the hay bales waiting to be moved into the store, to see Richard’s mum in the lane. “Happy birthday,” she called up. “I didn’t get an answer from the front gates and thought you might be here.”

She had brought some lovely plants for the garden, but just as she passed them up to me there was a commotion at the stables. I turned around to see Izzy leading Musca towards his paddock.

But Musca was in the mood for mischief – and so was Ojo. Our bouncy doodle sprang out from the hay store, surprising his little friend, who leapt forwards, surprising Izzy, and put in an almighty buck.

Thank goodness he is only nine hands high and was being playful, not aggressive. I jumped down from my perch but I’d hardly gone two steps before Willow had grabbed Ojo and put him in a stern “sit”, while Izzy continued with Musca trotting angelically beside her towards his paddock.

The second his head collar was off, Musca galloped the length of his field, bucking as he went and delighted to stretch his legs. Ojo was released and ran straight to the fence to watch his friend, his tail wagging and a smile on his face.

The 'Duchess Slant', which sees royal women cross their legs at the ankle and not the knee, is a hangover from a more prudish...
Read more
Lifestyle

Next up is Marc How profiles, a collection of black and white portraits of A-list celebrities. This book includes Jennifer Lopez, Nicole Kidman and...
Read more
Lifestyle

"We see core bond markets mainly exposed to (at times erratic) swings in the equity complex and (at times contradictory) news regarding a potential...
Read more