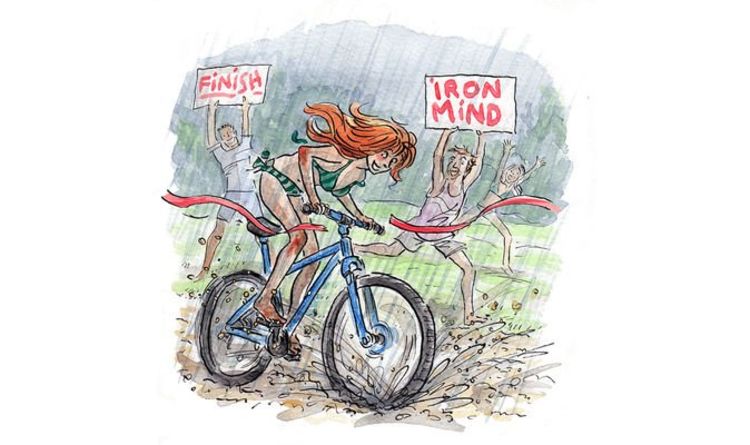 Although in years to come we may look back on 2020 and marvel at the amount of free time we were afforded, it can’t be denied that time away from home is still something we all seem to crave. We managed a short break with family friends who had been in our “bubble” – a wise move that was ridiculously well-planned for the Hammonds – and because there were quite a few of us, plus a swimming pool, bicycles and a small hill, some complete lunatic suggested we hold a team triathlon.

A great idea if you are, like the lovely Thomases, all incredibly athletic. If, however, like the Hammonds you’re not entirely keen on getting wet and could swim to save your life (just) but would do anything to get out of the school swimming gala – Izzy and Willow have suffered everything from a head cold to a fractured arm over the years – the idea of swimming a length, even without diving in, after a large lunch was to be avoided at all costs.

We were outvoted despite some very imaginative excuses – and impressive limping – by Mr Hammond.

So the course was designed and the swimming element increased to two lengths. Two. It was a seriously big pool, as well. The groans from the Hammond camp could be heard for miles, with Izzy telling everyone it reminded her of school and she didn’t want to play.

The teams were chosen by picking names out of a hat and although the male to female ratio was perfect, both team leaders looked slightly pained each time they got a Hammond. And who could blame them? One limper, four disastrous swimmers and only one of us with any recent cycling experience… However, following some serious swimming training – in the drizzle – and coaching on tactics, the event was ready to start.

Most of the course training had taken place before the rain started and although the first leg – the dreaded swimming – wasn’t really weather dependent, the sprint up the hill was.

Phil dived in on his racing start, emerged halfway down the pool like an overgrown captive dolphin and, like David Wilkie in his heyday, stormed to the far end, performed a perfect underwater turn and was soon back in the shallows and leaping from the depths.

Meanwhile, I was crawling along like a beached whale flapping its way back to the sea and nowhere near the end of the torture. As I hauled myself out I glimpsed Phil tearing up the slope. But the rain had turned it into a grass slide and before he knew where his feet were, they’d slid from under him and poor Phil landed on his face.

My chance had come. I legged it from the poolside, grabbing at my bikini bottoms to protect my modesty, and scrabbled on hands and knees to (almost) catch up with Phil, who was spitting grass from between his teeth.

We dashed round the side of the house, grabbed our bicycles and pedalled for all our might – Phil went like a rat out of a drainpipe. But our teammates were cheering their heads off and with calls of “handbrake turn” from my dear husband as we approached the corner, Phil simply couldn’t resist. “C’mon. Mind, show ’em what you’re made of,” he shouted.

Kate, Duchess of Cambridge, 38, focusses much of her royal work around early years education and parenting. On Tuesday, the Duchess honoured her commitment...
Read more
Lifestyle