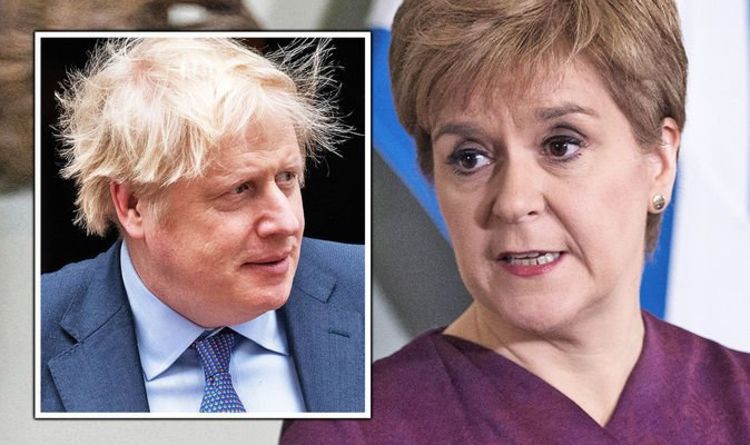 As tensions between Westminster and Holyrood rise, Ms Sturgeon warned Mr Johnson to not let their differences get in the way of solving the global issue of climate change. It came during an event organised by environmental think-tank, Green Alliance, on Tuesday.

Michael Gove, Chancellor of the Duchy of Lancaster and MP for Surrey Heath, was also present.

He said the two governments were working together “very well”.

Although Ms Sturgeon attempted to play down fears over an apparent turf war between Scotland and England, she said it was vital for the parties to work together.

She said she hoped for her “concerns” about the government’s sacking of Claire O’Neil, who had been co-ordinating plans for the COP26 summit, would be laid to rest when a replacement is appointed to the role later this week.

She added: “There are plenty of issues Boris Johnson and I can have squabbles about.

“This really should not be one of them.

“I personally and my government are committed absolutely and unequivocally to working closely and constructively with the UK government and with other partners in preparing for the COP26.”

Ms Sturgeon said COP26 was even more important than the talks that secured the Pairs Agreement on tackling climate change in 2015, as a result of the emergency and accelerated nature of global warming.

JUST IN: Expert outlines THREE reasons Scottish economy will be hit by Sturgeon

As Glasgow looks set to hold the next COP in November, logistics were thrown into chaos as backstage tiffs between Mr Johnson and Ms Sturgeon unfolded.

It culminated in Ms O’Neil – the recently sacked Tory political who presided over the summit – claiming that communication between Holyrood and Westminster had collapsed.

She was sacked after suggesting Mr Johnson offer Ms Sturgeon a formal role in the summit in order to stop her SNP from wrecking the event.

To this, Mr Johnson replied: “Over my F**king dead body,” according to The Sun.

He continued: “I’m not being driven out of Scotland by that bloody Wee Jimmy Krankie woman.”

It was a reference to the 1980s Scottish comedy act, The Krankies, in which Janette Tough, 72, played schoolboy Jimmy.

Ms O’Neil told The Sun: “It was an extraordinary reaction from the Prime Minister, and not how many of us thought he should handle the Nicola Sturgeon problem at all”.