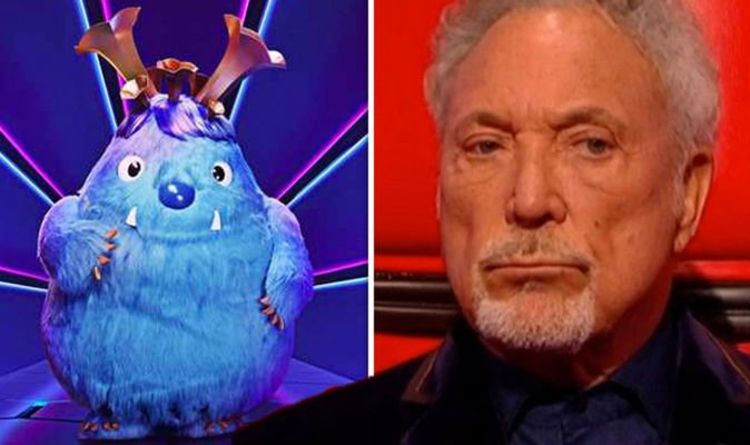 Monster is just one of five The Masked Singer contestants still battling it out to be crowned winner of the first ever edition of the UK edition of the global hit. Many fans of the ITV reality competition are sure they know who the celebrity is hidden inside the elaborate costume, but the latest instalment threw a spanner in the works. The contestant gave a rather stark reaction to the idea they could be Sir Tom Jones, 79, so could the game be up?

After the performance, judge Rita Ora, 29, was convinced the big blue creature was CeeLo Green, 44, a name her fellow panellist Davina McCall, 52, threw into the mix some weeks ago.

However, it was when Jonathan Ross, 59, gave his guess Sir Tom was even considered to be taking part in the show.

When The Voice coach’s name was mentioned, the contestant’s reaction seemed to suggest he was the singing icon, but is he really inside the costume?

Giving his verdict on the performance, Jonathan explained: “The deep voice, the stage craft, what if it’s the Welsh wonder Tom Jones?”

Monster could be sen chuckling away, to which the judge responded: “It could be. He’s laughing. He knows I’ve got him.

“I’ve got you Tom, haven’t I?” the panellist asked, but has he hit the nail on the head, or was the contestant mocking him.

The theory isn’t completely unjust, as fans also thought the Welsh singer could be undertaking the giant ego.

Viewers will have to keep on watching to find out after Monster sailed through to next weekend’s semi-final.

A few weeks ago, the contestant admitted they were in fact CeeLo as part of a two lies and a truth guessing game.

Fans are still convinced the American chart topper is taking part in the show, but are they right, or could it be someone no one has even thought of yet?

A double elimination in the latest episode saw two contestants bidding farewell after failing to win round the judges and studio audience.