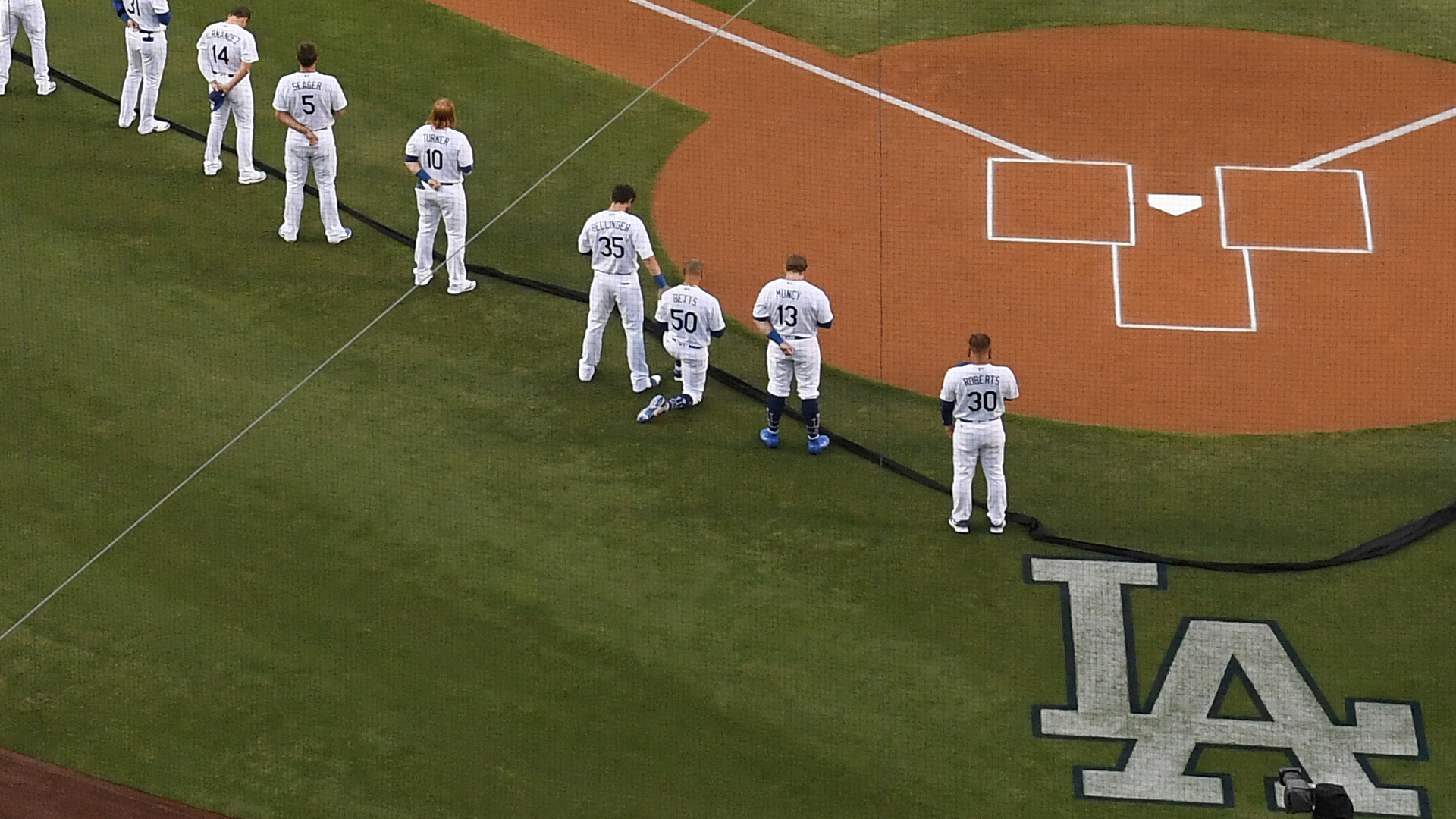 Mookie Betts chose to take a stand by kneeling on Thursday night.

Betts is now the face of baseball, perhaps more than Mike Trout could ever be. But not because of talent or profile or marketability.

Betts, arguably the most dominant Black player in baseball today, took a knee before the game alongside his teammates in a show of “unity” among MLB players. Then, while the national anthem played, Betts remained on a knee, while some of his teammates stood up so fast they almost ended up on the Injured List with hamstring tightness.

It’s more than enough that MLB players agreed to compromise in a way, wherein (almost) all players kneeled before the national anthem before choosing to stand for it. While the idea is cute, the compromise hijacks and waters down the meaning of what Colin Kaepernick started several years ago. Kneeling during the national anthem shows exactly where you stand on issues of race and social justice. That’s true solidarity. That’s true conviction. It’s not about “disrespecting the troops and/or the flag.”

Protests are not supposed to be comfortable or convenient. They’re supposed to make people pay attention.

Kneeling before the national anthem might show solidarity and it satisfies (almost) everyone on both sides of the subject, but it’s not dissimilar to ordering a triple bacon cheeseburger and large fries but getting a Diet Coke to go along with it. (The Yankees and Nationals performed the same display before their game Thursday in Washington, but no players kneeled during the anthem.)

While Betts’ teammates Cody Bellinger and Max Muncy may deserve the benefit of the doubt when it comes to their support for Black Americans and their teammate, speaking that support isn’t enough. If they truly believed in their convictions, in standing against social injustices and for racial equality, they should have taken a knee alongside Betts during the anthem.

Obviously, Bellinger and Muncy had a choice. They chose to stand for the national anthem and place their hands on Betts, rather than taking a knee alongside him. It’s a well-meaning gesture, but it’s not enough. Betts kneeling means a lot for the sport, but until more of the sport’s white players start kneeling beside him, the message will, unfortunately, get lost.

The Dodgers tweeted a video of Bellinger, Betts and Muncy with the caption “United,” which, well, not quite. “United” would show all three on a knee in support, not two players standing alongside a kneeling Betts.

To that end, Betts was the only Dodgers player who kneeled during the national anthem, this following a Morgan Freeman-narrated speech on the evils of racism that played to approximately no one but the players and personnel in attendance. That is, decidedly, not united.

And while the national anthem played, both Muncy and Bellinger stood apart from Betts until moving closer to him when cameras trained on them both.

having been watching this live, this hand on shoulder thing *definitely* was a photo op. it was not natural. they weren’t that close to him at first. but when they realized the camera was on them, they moved to put their hands on him. https://t.co/QMQBbu1Zcl

To put it plainly, it feels performative. It feels disingenuous.

MLB’s response to social justice has been disjointed, messy, chaotic and, at times, feeling like it’s nothing more than window dressing. While players say they agreed to the kneeling demonstration, it also feels like the idea of the movement has been hijacked by MLB to play both sides, making sure not to anger the sport’s uber-American, bald-eagle-kissing fan base with baseball fans who want to see progress in a sport where the idea of progress is a problem.

This isn’t to entirely diminish the steps that MLB seems to be taking to pull itself out of the muck and mire that have drowned it in varying degrees of racism over virtually its entire existence. Its social media accounts have been challenging the ignorant on Twitter. A “BLM” stencil was placed on the pitcher’s mound before the game (conveniently placed below an MLB logo, too, because remember, MLB is decidedly not racist, but I digress).

The Red Sox — the Boston Red Sox, of all teams — were strongest to put out a statement on racism at Fenway in June, after Torii Hunter sounded off on his racist experiences at Fenway Park.

Hunter’s experience wasn’t the only one, either. Adam Jones espoused a similar experience some years ago. The Red Sox offered an apology for Jones’ experience, as well. Wednesday night, the Red Sox unveiled a Black Lives Matter banner outside Fenway Park.

On Friday, the Rays used Opening Day as a means to call attention to the killing of Breonna Taylor, to some mixed reaction. MLB’s main Twitter handle has been sure to note that supporting players and their ideals and human rights is not political.

Today is Opening Day, which means it’s a great day to arrest the killers of Breonna Taylor

Progress is a process and these experiences in MLB are part of why Betts kneels. But it’s also why players should do more to support him. Baseball, and sports in general, need to stop being so willing to offer a safe haven for racism. Everyone’s money is green all the same, which is why it feels like there were so many half measures taken to appease both sides.

There are digestible reasons why players won’t kneel during the anthem. Maybe their family are members of the military or there is a heightened urge for patriotism. Even Betts said in 2016 that he would “never kneel” during the anthem because his father was in the Air Force. That has obviously changed.

If Betts can change his stance, there’s no reason others can’t, too. And at this point, Bellinger, Muncy and all other players who have decided to stand for the national anthem should understand that the protests aren’t about disrespecting the flag or the troops. It’s about supporting and saving Black lives. MLB and its players should also understand its unique place in American society and continue to press the issue, not play both sides.

That’s why it’s so important for all parties to commit. Put all the chips in the middle of the table. Challenge the racists. NASCAR started it all and had the right idea, removing another safe haven for racists and their ideologies when it banned the Confederate flag from its properties. The ensuing Bubba Wallace saga showed just how far behind as a society we still are confronting racism.

A reminder: Kaepernick’s protest was not about the flag or the anthem, both nothing more than symbols for a country currently grappling with itself over the ideas of racism, racial inequality and social injustices. The issues at hand should be cut and dry: Racism is bad. We support Black Americans. We listen to Black Americans. We support our teammates.

Baseball is a sport where Black Americans weren’t welcomed to play until Jackie Robinson did in 1947, and today the league’s overall percentage of Black players sits below 8 percent. Betts is already on an island as a Black baseball player. Maybe that island could use more villagers.

Asking Betts to stand for the national anthem of a country that seems so reluctant to want to offer justice for George Floyd, Breonna Taylor, Ahmaud Arbery and so many other Black Americans is an unfair expectation. Asking his teammates to display a stronger show of unity shouldn’t be.

US markets have seen a huge boost in the wake of last week’s selloff. But investors will remain cautious ahead of the US Election...
Read more