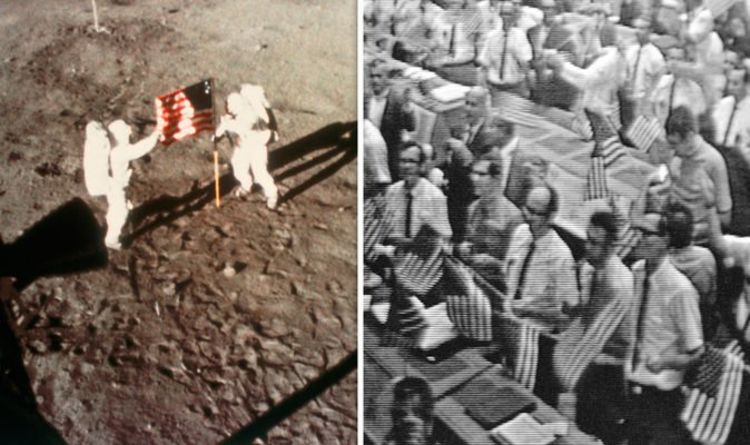 On July 20, 1969, NASA completed the seemingly impossible Apollo 11 mission to put the first two men – Neil Armstrong and Buzz Aldrin – on the Moon. Mr Armstrong made history, jumping off the lunar lander Eagle and delivering his legendary “one small step” speech to the millions watching back on Earth. The late astronaut, who passed away in 2012, became an overnight sensation after planting the US flag into the lunar surface and bringing an end to the Space Race with the Soviet Union.

However, he was supposed to do it a few hours later.

That’s according to claims made during Amazon Prime’s “NASA: A Journey Through Space” who laid bare all the details leading up to the monumental event.

The 2016 series revealed: “100 hours after takeoff, the Eagle undocks from the Columbia, Armstrong and Aldrin prepare for their descent.

“Present in Mission Control and witness to this is a who’s who of space dignitaries.

“The mood is tense as Columbia and Eagle momentarily travel beyond radio range.

“But after communication was reestablished and Eagle was hovering over the Moon’s rocky surface, Armstrong and Aldrin were given the go ahead to descend.

“But, then there was a problem, the lunar module computer is overwhelmed by the influx of data, causing a 1202 error.”

The series went on to explain how the pair overcame several obstacles to land in one piece.

It added: “Mission Control’s computer experts determine a go is still in order.

The documentary explained: “Mission Control erupts into applause, Armstrong and Aldrin prepare Eagle for an emergency lift off and then eat a meal, before they were supposed to take a sleep period.

“But the pair choose to delay that, they had a Moon to discover.

“Armstrong lowers the ladder to the Moon’s surface, television cameras broadcast his walk to the entire world at home.

“His words were more than just an answer to President John F. Kennedy’s challenge to reach the Moon, they are words that will be forever emblazoned as a marker of mankind’s achievement, proving our ability to overcome seeming impossibilities.”