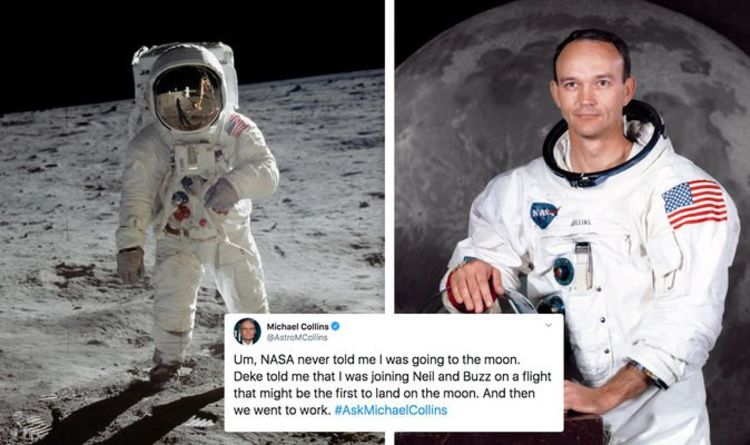 By the time Michael Collins took over as NASA’s Command Module Pilot for Apollo 11, he had already flown on Gemini 10 with astronaut John Young. Then in January 1969, he was announced as one of the three astronauts who would attempt the first human landing on the Moon.

Together with Commander Neil Armstrong and Lunar Module Pilot Buzz Aldrin, the Apollo 11 crew was revealed to the world on January 9, 1969.

But when asked online about his reaction to being told he would be part of the historic mission, Mr Collins astonishingly claimed he was never informed.

Instead, the astronaut revealed to his more than 68,600 Twitter followers the news was broken to him by astronaut Deke Slayton, a veteran of the Mercury missions.

Mr Collins said: “Um, NASA never told me I was going to the Moon.

“Deke told me that I was joining Neil and Buzz on a flight that might be first to land on the Moon.

“And then we went to work. #AskMichaelCollins”

When the three men were brought together for the purpose of the historic mission, Mr Collins dubbed the trio “amiable strangers”.

The astronauts had never served together before Apollo 11 and the amount of work and preparations needed to pull off the lunar landing meant they never had time to get to know one another properly.

Mr Collins said: “Apollo 11 was a little different than some of the other flights.

“We didn’t cruise around in colour-coordinated Corvettes or anything like that.

“We were all business. We were all hard work and we felt the weight of the world upon us.”

At the time of the Apollo 11 mission, Mr Collins was only 38-years-old and was selected to be an astronaut in 1963.

On Gemini 10, in 1966, he became the third American to “walk” in space, setting an altitude record during two extravehicular activities, or EVAs.

In total, he has logged more than 266 hours of spaceflight, including one hour and 27 minutes in the vacuum of space.

Unfortunately, during Apollo 11, his role was to stay in lunar orbit, inside of the Columbia Command Module.

NASA said: “He remained in lunar orbit while Neil Armstrong and Buzz Aldrin became the first people to walk on the Moon.

“His role in the Apollo mission earned him many awards and accolades, including the Presidential Medal for Freedom in 1969.”

While Commander Armstrong and Mr Aldrin descended to the Moon’s surface in their Eagle Lunar Module, Mr Collins raced around the Moon all by himself.

Whenever passed behind the far side of the Moon he would become the loneliest human being in the universe – cut off from direct contact with NASA and his colleagues on the lunar surface.

However, he said of the experience: “Far from feeling lonely or abandoned, I feel very much a part of what is taking place on the lunar surface.