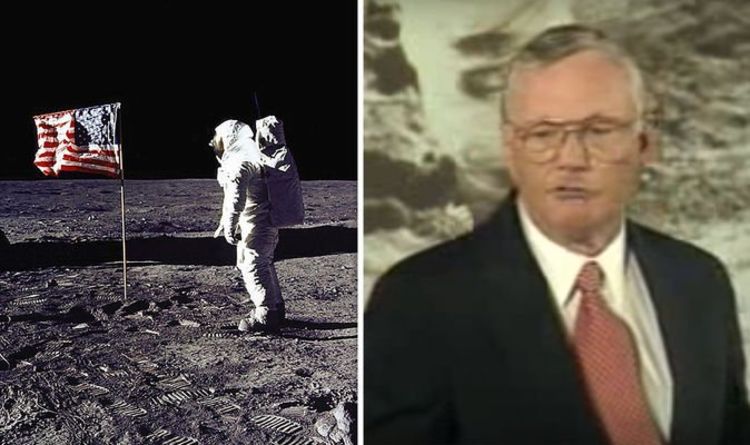 More than 50 years ago, on July 22, 1969, the legendary astronaut became the first man to step foot on the lunar surface during NASA’s successful Apollo 11 mission. Armstrong and his colleague Buzz Aldrin left Michael Collins in the Lunar Orbiter while the pair descended in the Lunar Module Eagle to the surface, bringing an end to the Space Race. On the 25th anniversary of their huge achievement, Armstrong addressed the White House to reminisce and inspire a new generation.

He said in 1994: “Fellow astronauts, ladies and gentlemen, Wilbur Wright once noted that the only bird that could talk was the parrot, and he didn’t fly very well, so I’ll be brief.

“This week, America has been recalling the Apollo programme and reliving the memories of those times in which so many of us here were immersed.

“Many Americans were part of Apollo, about one of two in every thousand citizens all across the country.

“They were asked by their country to do the impossible, to envisage the design and to build a method of breaking the bonds of Earth’s gravity and then sail forth to visit another heavenly body.”

The late astronaut went on to address the audience directly about the future of space.

He added: “The principal elements of leaving Earth, navigating in space and descending on a planet without runways or air traffic control would include the major requirements necessary for space-barring people.

“Today, the space shuttle flies overhead with an international crew, and a number of countries have international space programmes.

“During the space age, we have increased the knowledge of the universe a thousandfold.

“Today, we have a group of students among America’s best – to you we say we have only completed the beginning.”

The footage was uploaded to YouTube in 2009, but has been causing controversy since, with some outrageous claims being lobbied by viewers.

One of the comments reads: “He never says the word Moon once during his speech.”

Another adds: “How telling is that statement by Neil? The only bird that could talk was the parrot, and he didn’t fly very well?

“Then he looks back at the President and says don’t worry, I won’t talk very long.