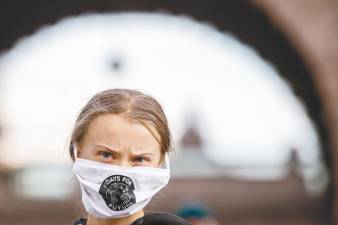 Teenage campaigner Greta Thunberg demonstrated outside parliament in her native Sweden on Sept 25 as a new set of worldwide protests to fight climate change kicked off.

More than 3,000 rallies by the Fridays for Future movement were scheduled to take place around the world, from Iceland to Australia and both online and in the streets depending on coronavirus restrictions.

“The main hope is, as always, to try to have an impact on the level of awareness and public opinion so that people will start becoming more aware of the climate crisis, so that we build up this pressure on people in power so that something happens,” the 17-year-old, surrounded by a dozen other activists, told reporters.

“We need to treat the climate crisis as a crisis, it’s just as simple as that,” she said, holding her now-famous “School Strike for the Climate” poster and wearing a face mask.

In Sweden, more than 200 events are planned, though corona restrictions will limit each to fewer than 50 participants.

Thunberg said the Swedish demonstrations would “focus on being few people in many places and keeping distance.”

Previous global Fridays for Future school strikes have seen millions of young people pour into the streets to demand action.

Throughout the coronavirus pandemic, however, much of the group’s actions moved online.

Greta herself resumed her Friday school strikes on Sept 4, after returning to high school following a year spent campaigning for the climate around the world.

Meanwhile, Greenpeace marked the day by releasing a photo taken several days ago in the Arctic of 18-year-old ornithologist Mya-Rose Craig, known as “birdgirl”, standing on an ice floe holding a poster “Youth Strike for Climate” – in what it said was the world’s most northerly climate strike.

“I’m here because I want to see for myself what’s at stake as this crucial protector of the planet, the Arctic Ocean, melts away at a terrifying rate,” she said from the Svalbard archipelago in a Greenpeace statement. – AFP-Relaxnews