More than a hobby 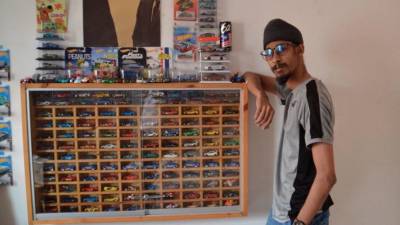 KAVALDIP SINGH is an ardent toy car collector. To date, he has amassed about 1,550 toy cars, and has spent more than RM10,000 on his passion.

But the more I spoke to him, the more I realised that collecting toy cars is more than just a hobby to this 22-year-old Perak lad.

He has big dreams for his collection.

“My ultimate dream is to be in The Guinness Book of Records as a person with the largest number of toy cars in the world,” says Kavaldip, who is pursuing a Diploma in Human Resources.

“I want to own at least 50,000 to one million toy cars. If possible, I would also like to have a mini museum where I can display my toy car collection. I can explain the facts and the history of each car to the people who visit my museum.”

Interestingly, it was his 60-year-old father Kuldip Singh who encouraged his passion for collecting toy cars.

“My father collected toy cars when he was in his 20s, long before he was married,” says Kavaldip.

When Kavaldip was five years old, he was totally fascinated by his father’s collection, and started playing with them.

“I remember that my father kept telling me that I should be gentle when I am playing with his toy cars,” says Kavaldip, who is also the youngest of three siblings.

“The last thing my father wanted was for me to destroy any of his toy cars.”

When Kavaldip was eight, he got his own toy car.

“My father brought me to a toy shop in a shopping mall, and asked me to choose my own car.”

He chose the Hotwheels Ferrari 156.

“I was too young to understand the importance of the Ferrari brand,” he says.

“I chose the car because I was attracted to the colour and the shape.”

He remembers being so proud of his toy car that he brought it to school and showed it to all his classmates.

“It was my teacher who told me that my car was not an ordinary car,” he says.

He still has that first toy car, and it is still in good condition even today. There have even been some interested parties who wanted to purchase the car from him.

“The company is no longer producing that particular Ferrari model I own,” he says.

“But I am not willing to part from it. The car holds a lot of sentimental value for me. It was the first toy car that my dad bought for me, and I cherish that fact. We had a great time picking out the car together.

“Selling it would be like selling a memory that I share with my father. I do not think I can do that.”

Among his collection are cars that were showcased in two prominent film franchises. This includes a series of cars that were featured in the James Bond and The Fast & The Furious films.

James Bond films are his father’s favourites, while he prefers the Fast and Furious franchise.

“I love the Fast and Furious franchise because it highlights the relationship between human and machine (the cars),“ he says.

“The most important thing is the person behind the wheel, and not the machine.”

He admits that some of his friends are baffled by his willingness to spend so much money and energy on his toy car collection.

“However, they are more than toy cars to me. I can’t afford some of the cars in real life. They cost millions. By having their toy versions, it makes me feel I can own a small piece of them.

“There is a well-known saying: ‘A toy car is a projection of a real car, made small enough for a child’s hand and imagination to grasp’.”

When asked what advice he would give to people who want to start their own toy car collections, he says: “You have to ask yourself, why do you want to start this hobby? Are you doing it because your friends are doing it? If that is the case, your passion for collecting toy cars will not last.

“You will collect toy cars for a few weeks, and then, you will abandon this passion and that will be a real shame. All your efforts will be wasted if you abandon it. You must have a genuine passion for collecting, for you to want to sustain it.”