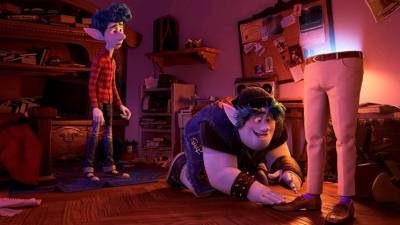 DESPITE the feral unicorns, elves and other mythical creatures, the trailers for this movie really failed to sell what a remarkable piece of work Onward actually is.

It may not be the best movie to come out of Pixar, but the ending will tug at your heartstrings and you will find yourself reaching for a hankie towards the end.

The story begins with a narrator explaining how the world was once filled with magic, but because it was hard to master, the inhabitants soon moved to other means, such as modern conveniences. Magic was then relegated to the stuff of lore.

In our present day, we follow awkward elf teen Ian (Holland) who on his birthday is given a package by his mother Laurel (Louis-Dreyfus) that he has to open with his older brother, Barley (Pratt).

The package was left behind by their late father, whom Ian has never met but longs to know more about.

Turns out their late father believed in magic, and left behind a staff, a phoenix stone, and instructions on how to use them so that he can come back to life for 24 hours.

While Barley is the one who believes in magic and mythology, only Ian is able to wield the staff. Unfortunately he only manages to bring back the bottom half of his dad, and so both brothers set off to find another phoenix stone to help bring back the rest of their dad.

Naturally they face all sorts of adventures and misadventures before Ian (and we, the audience) comes to a wonderful revelation.

There are not many movies out there that capture that special bond between brothers the way Onward has. Even supporting characters such as Manticore (Octavia Spencer), an ancient, fire-breathing warrior turned restaurant owner and Officer Colt Bronco (Mel Rodriguez), a centaur cop who is Laurel’s current boyfriend, provide some interesting layers to the story while making us laugh.

As with most Pixar films, you have to wait a bit for the story to build-up before things really get good.