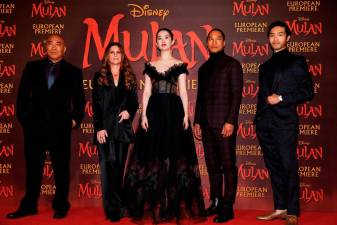 THE release of Walt Disney Co’s epic action movie Mulan and Universal Pictures’ ninth Fast and Furious film were postponed on Thursday as Hollywood scrambled to adjust to the worldwide spread of coronavirus.

Disney had held a red-carpet premiere on Monday to promote Mulan and said at the time that the film would be released in the United States as planned on March 27.

But on March 12, as US authorities urged against large gatherings and took other steps to stop coronavirus spread, Disney said it had decided “out of an abundance of caution” to postpone the debut of Mulan as well as April releases The New Mutants and Antlers.

“We truly believe in the moviegoing experience, and we are looking at new potential 2020 release dates to be announced at a later date,” a Disney spokesperson said.

F9, the new Fast and Furious movie from Comcast Corp’s Universal Pictures, was scheduled to debut May 22. Its release was delayed by nearly a year to April 2, 2021.

Mulan and F9 were expected to rank among the biggest box-office hits in the coming months but were among several disruptions to global entertainment caused by coronavirus.

The virus has closed movie theaters in China, Italy and many other nations, while a ban on travel from Europe to the United States announced by President Donald Trump onMarch 11 is seen likely to curtail red carpets and other promotional events for movies and stars.

U.S. movie theaters remained open as of Thursday. But an industry source said operators may close larger theaters in some areas depending on advice from local authorities.

Ohio on Thursday banned crowds of more than 100 people. In California, Governor Gavin Newsom advised against non-essential gatherings of more than 250 through the end of the month.

Movie theaters were exempted, but even if they stay open, their schedules would have to be rearranged.

Also on March 12 , Paramount Pictures, a unit of ViacomCBS Inc, indefinitely delayed the release of thriller A Quiet Place Part II, which was due to start its international rollout on March 18. And it postponed romantic comedy The Lovebirds, originally set for April 3.

“Due to the ever-changing circumstances of what’s going on in the world around us, now is clearly not the right time to do that,” the Quiet Place director John Krasinski said in a post on his Instagram account.

The decisions followed the postponement last week of the James Bond movie No Time to Die to November from April, and a delay for Peter Rabbit 2 to August from March 27.

Separately, the Rock & Roll Hall of Fame in Cleveland postponed its induction ceremony scheduled for May 2 to an unspecified future date. That followed the cancellation of the Coachella music festival, South by Southwest and other large entertainment gatherings. – Reuters