by Newslanes 1 week ago1 week ago
60views 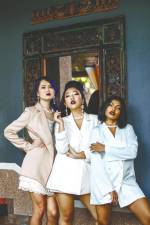 IN A MUSIC industry brimming with talent, it is not hard to find a musician, band or group that caters to the various music tastes within a society.

Filling in the R&B and Pop subgenre with their own style and flavour is Tiga Soul, consisting of the trio of Sachie Amira, Kelly Siew and Alesia Dhana.

Influenced by R&B groups from the ‘90s, Dhana pointed out that the group not only draws from the musical elements of that era, but also how the group itself is a melting pot of women who encourage empowerment and unity.

The group’s inception began four years ago, at a Joanne Kam cabaret show, believe it or not.

Siew explained: “Sachie and I were in the local gig music scene for [some] time, but it was the first time we actually worked together.

“Alesia joined us halfway through the contract, and after the contract ended we felt that it would be a waste if we did not continue to perform together, since we had developed stage chemistry, and also shared the same love for ‘90s R&B.

“So we started organising our own shows, and one thing led to another, and now we also have several original tracks released!”

Tiga Soul’s music is heavily inspired by the personal experiences of its members, whether from their work, love, or family life.

“There’s always a lesson we can take out of it, no matter whether it comes from joy or pain,” said Sachie.

“Then, when we share it with our listeners, and if one soul out there is able to relate to our art, they feel connected, they feel heard. And that’s the biggest honour we get as writers and singers.”

Part of the draw of Tiga Soul, aside from their singing talent, is the trio’s ability to converse (or sing) in seven different languages. This is an aspect that the group hopes leverage upon with future releases.

“We are constantly pushing ourselves and the boundaries of what we can do!” Alesia said.

“After all, we are Malaysians, we have so many different languages and dialects. Singing in other languages just gives us a wider spectrum to engage and share our music with more people.”

After performing a Christmas show which was streamed online on Dec 7, Tiga Soul is setting its eyes on the next goal for 2021; the release of the group’s first EP.

Sachie explained: “Hopefully everything goes well! It’s definitely been a challenge because we’re not supported by any labels or a big team, but we’re definitely blessed with such a solid support system that keeps cheering us on through this turbulent journey.

“And the plus side, of course, is that we are learning so much about every aspect of producing a girl group – group styling, music video production, marketing, recording, shoots, and so on.”

Alesia concluded: “Our aim is to write more songs, make an album and have a concert, but essentially, we want to make music that fulfils our souls and those of our listeners as well.”