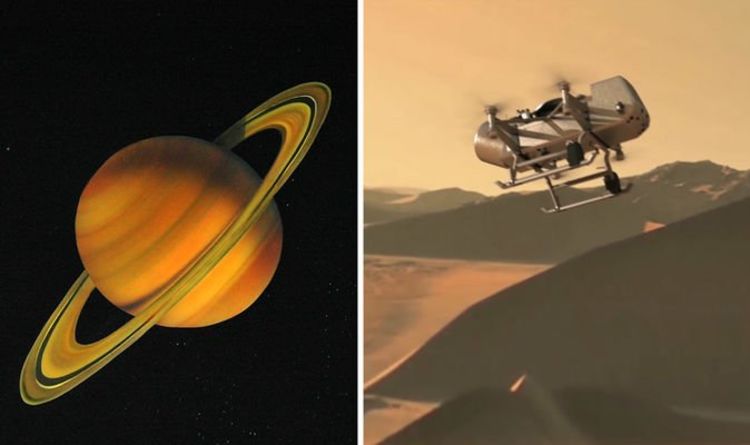 Dragonfly is the planned spacecraft and mission that will send a mobile robotic drone to Titan, the largest moon of Saturn, in order to study prebiotic chemistry and extraterrestrial habitability at various locations where it will perform vertical-takeoffs and landings (VTOL) in 2026. Titan is unique in having an abundant, complex, and diverse carbon-rich chemistry on the surface of a water-ice-dominated world with an interior water ocean, making it a high-priority target for astrobiology and origin of life studies. The project was proposed in April 2017 to NASA‘s New Frontiers programme by the Johns Hopkins Applied Physics Laboratory following the success of both the Cassini and Huygen missions.

On June 27, 2019, Dragonfly was selected to become the fourth mission in the New Frontiers programme and a month later exact specifications for the craft were explained by Brian McManus on his YouTube channel Real Engineering.

He said: “As our quest to learn more about the origins of life continues, NASA’s new mission called Dragonfly will begin its journey to Titan in 2026 and the work of Cassini and Huygen mission will be vital to its success.

“Dragonfly is a mobile landed fitted with eight large rotors that will help it to fly around the surface like a drone, an incredibly difficult engineering challenge, and the data gained from Huygens will be insanely valuable when designing the drone.

“Everything from its sensor layout, battery capacity, energy source and propellers design will be dictated by what we learned.”

Mr McManus revealed how the scientists at NASA have taken inspiration from previous missions.

He added: “Dragonfly will have many of the same scientific instruments as the Curiosity Rover, it will have a skid mounted drill to take soil samples and run it through a mass spectrometer to learn more about the soil composition.

“It will be capable of quickly analysing elemental compositions at landing sites before landing using a neutron-activated gamma-ray spectrometer.

“This instrument typically needs cryocooling, but thanks to Titan’s subzero temperatures it can be passively cooled.

“It will, however, need to generate its own neutrons rather than relying on cosmic rays to generate them as the atmosphere blocks too much sunlight.’

“Thankfully, we have a lot of practice in a different type of energy source through missions like the Curiosity Rover, which was powered by Radioisotope Thermoelectric Generator.”

Mr McManus finalised by explaining how the probe will use Titan’s long nights to recharge its batteries.

He finalised: “This worked by converting the heat from the natural decay of a radioisotope into electricity, using a simple process known as the Seebeck effect.

“The thermal electric generator used for the Curiosity Rover could generate 110 Watts of electrical power, but we will lose some pf that power generation capability during Dragonfly’s eight year journey.