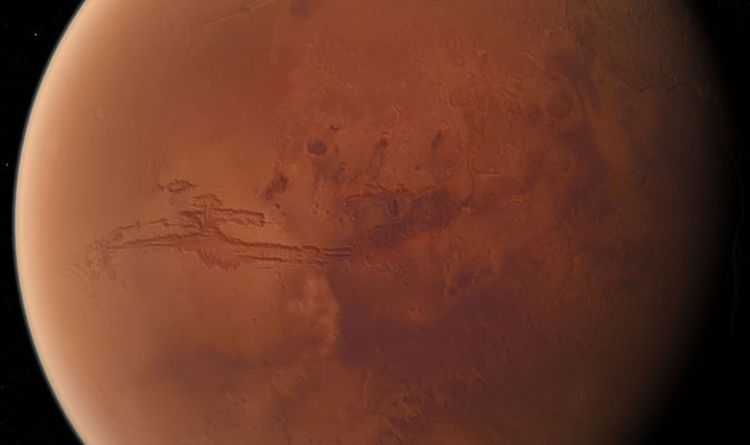 Such easily obtainable water sources on the planet have meant scientists can now much more easily chart landing positions on the planet with the discoveries meaning we might be closer to humans on the surface than we realise. One zone in particular was identified by researchers as being prime for future astronaut missions. The spot in the Red Planet’s northern hemisphere known as Arcadia Planitia, has an abundance of ice within it and boasts temperate conditions with plenty of sunlight.

Lead author of the study Sylvain Piqeux who studies planetary surfaces at NASA’s Jet Propulsion Laboratory in California, said in a statement.

It read: ”You wouldn’t need a backhoe to dig up this ice. You could use a shovel.“

It added: “We’re continuing to collect data on buried ice on Mars, zeroing in on the best places for astronauts to land.”

Further study of the map provided by the research team could also hold the key to other promising areas to land, giving the Space agency options for it’s planned mission in the 2030s.

The hope is that instead of hauling massive amounts of water the astronauts could get their drinking water and the components of water (oxygen and hydrogen) for rocket fuel from Mars itself.

The map is based on data from two of NASA’s longest running spacecrafts The Mars Odyssey and the Mars reconnaissance Orbiter.

They employed heat sensitive instruments that detected changes in the surface temperature where ice was buried.

The surface of Mars is a desert as liquid on the surface usually evaporates quickly given the thin atmosphere.

JUST IN: NASA shock: Astronaut reveals the ‘most serious moment’ on Apollo 15

Now the ESA is appealing to NASA’s Jet Propulsion Laboratory for assistance, with trials of a new design for the parachute set to start trials in Pasadena in the new year.

“It is going to be very, very tight getting the probe ready for next summer’s launch,” ExoMars project manager Pietro Baglioni told the Guardian.

The plan is to employ a heat shield as it travels through Mars’ upper atmosphere, which should see its speed drop from 13,000mph to near a more manageable 1,000mph.

At that point a couple parachutes should slow the lander further allowing the rover to reach the surface at a safe speed.

“The entire sequence from atmospheric entry to landing will take only six minutes,” said Baglioni.

“There is a great deal that can go wrong in that time, however.”

Baglioni says that the latest tests, with NASA’s help, have gone well.