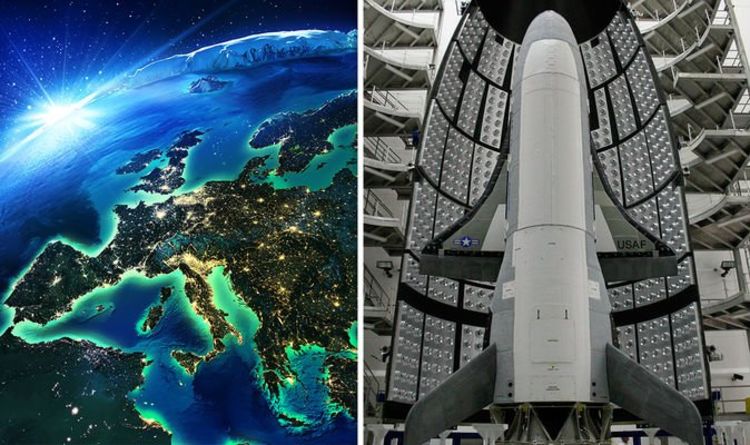 The X-37B is a reusable robotic spacecraft boosted into space by a launch vehicle, before re-entering Earth on a spaceplane after completing its missions. Originally a NASA project in 1999, it was transferred to the US Department of Defence in 2004 and its first spaceflight was in 2006, commissioned by the US Air Force. The current spacecraft is the result of years of fine-tuning from the military and has now completed five missions outside the Earth’s atmosphere.

Astrophysicist Scott Manley revealed on his YouTube channel some of the scarce details known about this top-secret project.

He said in 2019: “The Air Force announced they would be building the X-37B, a fully capable orbit vehicle.

“At that point, everything went quiet, because it was a super classified Department of Defence project.

“The front of it looks a lot like a miniature space shuttle with the classic lifting body nose and the Delta wings.

“But then, at the rear, it extends back a whole lot further, widens out and instead of a single tail, you have a V-shaped tail with a pair of rudders that are also elevators.

“The whole vehicle is about 10 metres long and about four-and-a-half metres wide, with a total mass of about five tonnes.”

The Scottish YouTuber, who holds a Masters in computation physics, ran through some of the finer details.

He added: “For manoeuvring in space there is a set of reaction control thrusters all integrated neatly into the surface and a single large engine at the rear.

“It’s unusual for this, because the single-engine isn’t actually square on the rear, it’s offset to the right a little.

“But it does, of course, still aim though the centre of the mass, the original design called for a pair of engines, using hydrogen peroxide.

“The Air Force version supposedly uses monomethylhydrazine and dinitrogen tetroxide and that’s why, after it lands, the first people that approach it are wearing fully self-contained life support suits, because hydrazine is scary stuff.”

Mr Manley speculated about some of the features the X-37B may have.

He added: “As far as I know the actual engine has not been revealed, but it’s probably a pressure fed system that gets 700 to 900 Newtons of thrust.

“There is no cockpit, or windows, or anything like that for people inside, but there is a payload bay door that is a couple of metres long.

“While we’ve not seen them open, we do know they have radiators integrated into them, like the space shuttle and a solar panel array that deploys out of this.

“So far, there have been five flights with this vehicle, and we know that there are two separate vehicles that have been identified due to subtle differences in their hardware.”

Then, Mr Manley went on to give his own prediction on what the spacecraft is used for, based on what he has seen.

He continued: “I think what they are doing is testing hardware for future satellites, it provides a platform for them to put stuff in space for a long time.

ByOn April 28, 1963, Paul McCartney, George Harrison and Ringo Starr jetted off on holiday to Santa Cruz, Tenerife, for a 12-day getaway. One member of the band was...
Read more