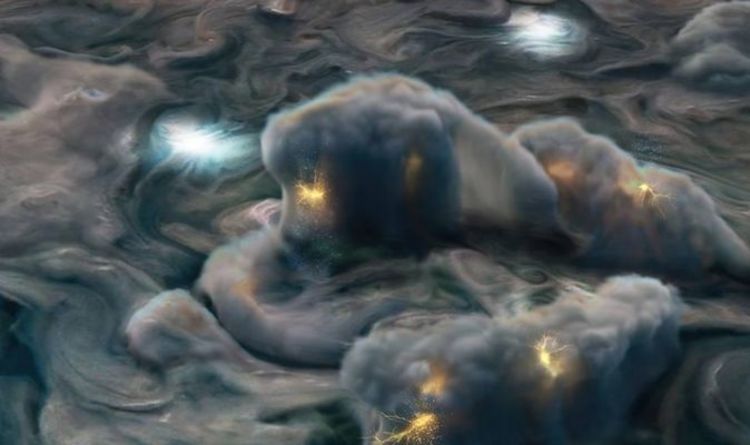 New data has been sent back from NASA’s Juno spacecraft, and the results are stunning. One of the results of the research is proof of huge lightning storms which are unlike the phenomenon we see on Earth. On our planet, lightning is formed in water clouds, whereas on Jupiter lightning originates in clouds containing an ammonia-water solution.

Space scientists have dubbed this “shallow lightning” because they form at a relatively low altitude where the ammonia acts as an antifreeze, keeping the clouds cooler which blast out grains of ice as the lightning blows.

Heidi Becker, Juno’s Radiation Monitoring Investigation lead at NASA’s Jet Propulsion Laboratory in Southern California, said: “At these altitudes, the ammonia acts like an antifreeze, lowering the melting point of water ice and allowing the formation of a cloud with ammonia-water liquid.

“In this new state, falling droplets of ammonia-water liquid can collide with the upgoing water-ice crystals and electrify the clouds. This was a big surprise, as ammonia-water clouds do not exist on Earth.”

These “mushballs” are two-thirds water and one third ammonia gas that becomes the seed for Jovian hailstones.

Tristan Guillot, a Juno co-investigator from the Université Côte d’Azur in Nice, France, and lead author of the second paper, said: “Eventually, the mushballs get so big, even the updrafts can’t hold them, and they fall deeper into the atmosphere, encountering even warmer temperatures, where they eventually evaporate completely.

“Their action drags ammonia and water down to deep levels in the planet’s atmosphere. That explains why we don’t see much of it in these places with Juno’s Microwave Radiometer.”

The discovery of ammonia-based clouds and “mushballs” has also helped to solve another puzzle of Jupiter.

READ MORE: Jupiter at night: How to see Jupiter and its four moons this week

Previous readings from Juno revealed ammonia on the gas giant, which is more than 100 times the size of Earth, was depleted, and experts were unsure what had happened to it.

However, the analysis published in the journal Nature shows that it has been stored in the clouds.

Scott Bolton, Juno’s principal investigator at the Southwest Research Institute in San Antonio, said: “Previously, scientists realised there were small pockets of missing ammonia, but no one realised how deep these pockets went or that they covered most of Jupiter.

“We were struggling to explain the ammonia depletion with ammonia-water rain alone, but the rain couldn’t go deep enough to match the observations.