NASA news: Space agency released stunning image of Jupiter in all its glory 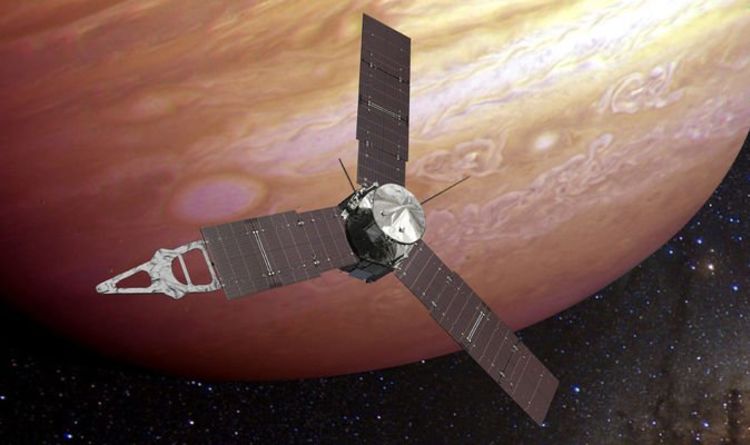 NASA has been getting up close and personal with Jupiter over the past few years, thanks to its Juno spacecraft which is orbiting the gas giant. The space agency’s mission has revealed a plethora of secrets about Jupiter while also presenting some stunning images.

The latest image released by NASA shows Jupiter, known as the ‘King of the Solar System’ due to its sheer size, in all its glory from the southern hemisphere of the planet.

NASA said of the image: “Not only is Jupiter the largest planet orbiting the Sun, it contains more than twice the amount of material of all other objects in the solar system combined — including all the planets, moons, asteroids and comets.

“In composition, Jupiter resembles a star, and scientists estimate that if it had been at least 80 times more massive at its formation, it could have become a type of star called a red dwarf rather than a planet.

“While the universe’s most common elements, hydrogen and helium, make up most of Jupiter’s mass, the striking clouds that are visible at the top of its atmosphere are composed mostly of ammonia and hydrogen sulfide.

Jupiter plays a huge part in protecting Earth from asteroids, some experts believe.

The massive planet has such a strong gravitational pull that it helps to keep the asteroid belt – located between Mars and the gas giant – in place so space rocks are not flying around the solar system.

It is also theorised the planet draws loose asteroids, comets and meteors in.

NASA has said on its website: “Astronomers think that if it were not for the giant planet Jupiter exerting its gravitational force on the asteroids in the belt, the inner planets would be constantly bombarded by large asteroids.

However, research also found these asteroids in the gas giant’s orbit can push and shove each other to the point where they are ejected from the pull of Jupiter and alter their trajectory.

Some of these asteroids could end up on a collision with Earth.

Kenta Oshima, a researcher at the National Astronomical Observatory of Japan, wrote in the research paper that the objects which are of the biggest worry are the ones that are on a high-inclination of the solar plane.