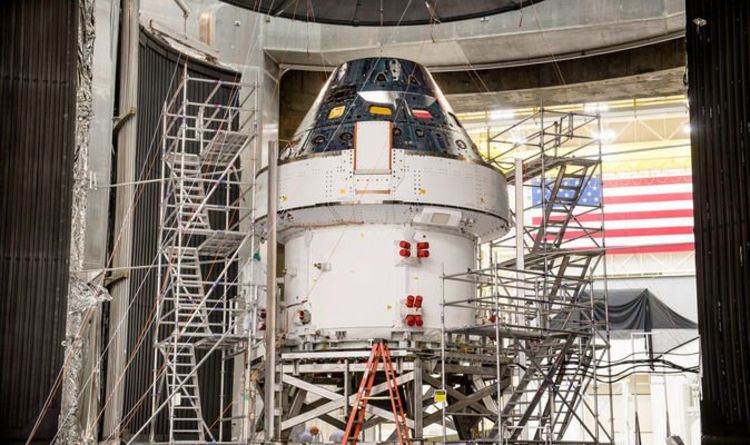 NASA said on its website: “NASA’s Orion spacecraft, a critical part of the agency’s Artemis I mission, has completed three months of testing at the agency’s Plum Brook Station in Sandusky, Ohio.

“During the testing, the craft was subjected to the extreme temperatures and electromagnetic environment it will experience in its upcoming test mission to the Moon.”

NASA is currently on the lookout for astronaut recruits who could go to the Moon and to Mars.

The space agency is now accepting applications for want-to-be astronauts, who will begin training as early as 2021.

The astronauts could be sent to the ISS in the future, or even be selected for the Artemis Mission, which will see NASA launch astronauts to the Moon in 2024.

To apply, one must be a citizen of the US and have a degree in a STEM field, including engineering, biological science, physical science, computer science, or mathematics, from an accredited institution.

The requirement for the master’s degree can also be met by:

• Two years (36 semester hours or 54 quarter hours) of work toward a Ph.D. program in a related science, technology, engineering or math field;

• A completed doctor of medicine or doctor of osteopathic medicine degree;

• Completion (or current enrolment that will result in completion by June 2021) of a nationally recognised test pilot school program.

NASA Administrator Jim Bridenstine said: “We’re celebrating our 20th year of continuous presence aboard the International Space Station in low-Earth orbit this year, and we’re on the verge of sending the first woman and next man to the Moon by 2024.

“For the handful of highly talented women and men we will hire to join our diverse astronaut corps, it’s an incredible time in human spaceflight to be an astronaut.

“We’re asking all eligible Americans if they have what it to takes to apply.”

NASA said: “After returning humans to the Moon in 2024, NASA plans to establish sustainable lunar exploration by 2028.

“Gaining new experiences on and around the Moon will prepare NASA to send the first humans to Mars in the mid-2030s. “NASA expects to select the new class of astronaut candidates in mid-2021 to begin training as the next class of Artemis Generation astronauts.”