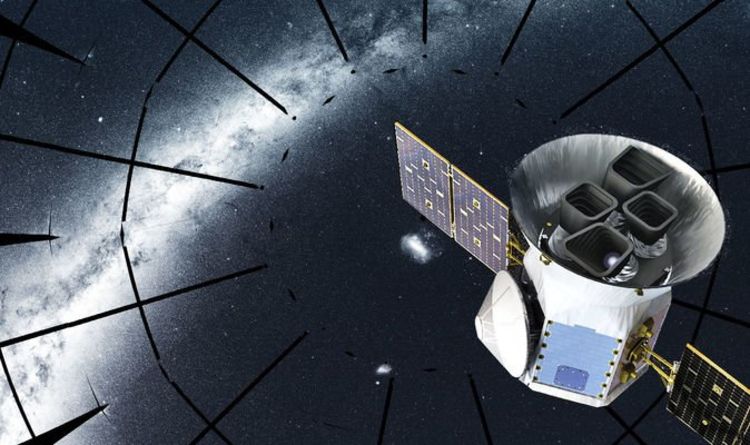 The stunning panorama was constructed from 208 TESS images taken during the NASA satellite’s first year of science operations. The cosmic mosaic reveals both the beauty of the Earth’s neighbourhood and the power of TESS’s cameras.

Ethan Kruse, a NASA Postdoctoral Program Fellow who assembled the mosaic, said: “Analysis of TESS data focuses on individual stars and planets one at a time, but I wanted to step back and highlight everything at once, really emphasising the spectacular view TESS gives us of the entire sky.”

Within this theatre, TESS has discovered 29 exoplanets, which are worlds beyond Earth’s Solar System, as well as more than 1,000 candidate planets under investigation by NASA.

TESS divided the southern sky into 13 sectors and captured images of each one of them for nearly a month using four cameras, which carry a total of 16 charge-coupled devices.

These cameras captured a full sector of the sky every 30 minutes as part of its search for exoplanet transits.

mong the many notable celestial objects visible is the glowing band of the Milky Way, our home galaxy seen edgewise, the Orion Nebula (top), a nursery for newborn stars, and the Large Magellanic Cloud (centre), a nearby galaxy located approximately 163,000 light-years away.

Some stars, like Alpha Centauri, are so bright they created long spike-like artefacts called saturation trails.

Others, like Rigel, produce ghostly smudges as their light reflects off elements of the TESS camera system.

The prominent dark lines are gaps between the detectors in TESS’s camera system.

Transits take place when a planet passes in front of its host star from Earth’s perspective, briefly dimming its light.

During the satellite’s first year of operations, each of its cameras captured 15,347 30-minute photos.

The resulting pictures are just a part of more than 20 terabytes of southern sky data TESS has returned, the equivalent to streaming nearly 6,000 HD films.

In addition to its exoplanet discoveries, NASA’s satellite has captured a comet in our solar system, followed the progress of numerous stellar explosions called supernovae, and spotted a star torn apart by a black hole.

After completing its southern survey, TESS turned north to begin a year-long study of the northern sky.

What is an exoplanet?

NASA defines an exoplanet as any planet beyond our Solar System.

Since the first confirmation of an exoplanet orbiting a sun-like star in 1995, and with only a few, narrow slices of our Milky Way galaxy so far surveyed, NASA already struck many rich veins.

A recent statistical estimate places, on average, at least one planet around every star in the galaxy.

This means there is roughly a trillion planets in our galaxy alone, many of them in Earth’s size range.

Professor Sara Seager an exoplanet research pioneer at the Massachusetts Institute of Technology, said: “Right now we know, for the first time, that small planets are very common.

“It’s phenomenal. We had no way to know that before Kepler. We’ll just say, colloquially: They’re everywhere.”