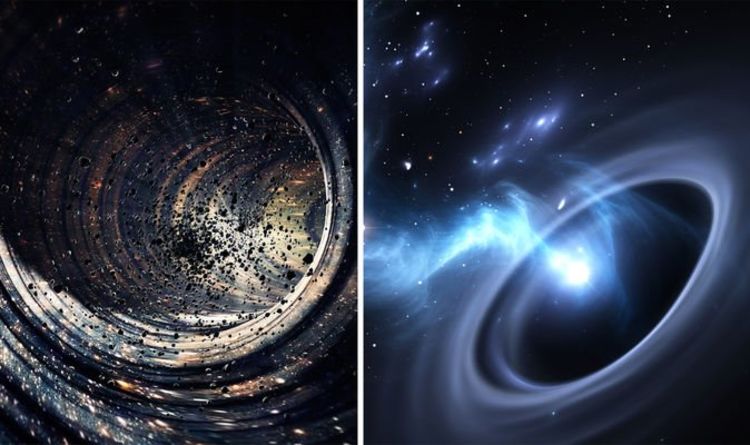 Black holes remain one of the most mysterious entities in the universe, but what is known of them is terrifying. They completely break the laws of physics with their singularity at the centre, which is a one-dimensional point where gravity becomes infinite and space and time become curved. The only other point in nature where a singularity existed is at the Big Bang.

This is why NASA believes black holes could be a portal to another ‘reality’ where you experience space and time in a completely different way.

NASA said on its website: “For black holes, distant observers will only see regions outside the event horizon, but individual observers falling into the black hole would experience quite another ‘reality’.

“If you got into the event horizon, your perception of space and time would entirely change.”

The perception would change because, in the universe, space and time are intertwined, called space-time.

However, gravity stretches space-time and objects with a large mass will be able to stretch space-time to the point where it is unrecognisable, known as time dilation.

The more mass an object has, the more it stretches and slows down time so something as large as Sagittarius A* – the gigantic black hole at the centre of the galaxy – would be able to stretch time to a point where it almost comes to a complete standstill.

Sagittarius A* has a radius of 22 million kilometres and a mass of more than four million times that of the Sun.

In other words, it is very dense.

READ MORE: Time travel BREAKTHROUGH: Time can be stopped and this is how

For example, if you were travelling feet first into a black hole, the gravity be so strong you would literally be ‘spaghettified’, and you would be stretched out to a point where you would just be a stream of atoms heading towards the centre.

Another impossible hurdle to overcome would be getting to a black hole.

The nearest black hole to our planet is located 6,523 light-years away – one light-year is 5.88 trillion miles.