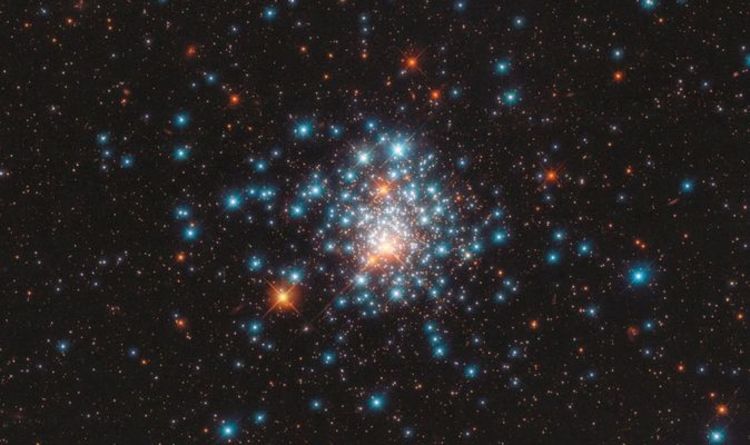 An image of the distant star cluster known as NGC 1805 has been released by NASA, showing how mesmerising the cosmos it. In the image, thousands of stars can be seen dancing around one another “like bees swarming around a hive”.

NGC 1805 is located near to the Large Magellanic Cloud – a satellite galaxy which hovers near the edges of the Milky Way.

The area in space is extremely jam packed, with NASA stating the stars in the image are up to 1,000 times closer to each other than any star is to our Sun.

Due to the close proximity of each other and the way stars orbit their nearby companion, NASA said it makes the idea of planets in the system very unlikely.

Nonetheless, the globular cluster produces stunning stars which are a range of colours.

NASA said: “The striking difference in star colours is illustrated beautifully in this image, which combines different types of light: blue stars, shining brightest in near-ultraviolet light, and red stars, illuminated in red and near-infrared.

“Space telescopes like Hubble can observe in the ultraviolet because they are positioned above Earth’s atmosphere, which absorbs most ultraviolet light, making it inaccessible to ground-based facilities.

“This young globular cluster can be seen from the Southern Hemisphere, in the Dorado constellation, which is Portuguese for dolphinfish.

“Usually, globular clusters contain stars that are born at the same time. NGC 1805, however, is unusual as it appears to host two different populations of stars with ages millions of years apart.

“Observing such clusters of stars can help astronomers understand how stars evolve, and what factors determine whether they end their lives as white dwarfs or explode as supernovae.”

The JWST is so powerful it will reach back to the furthest realms and the earliest moments of the universe.

JWST, which is named after NASA’s second administrator James Webb who served from 1961 to 1968 and played a major part in the Apollo missions, has the capability of scanning thousands of planets for alien life – even though those planets are thousands of light-years away.

"Although individual device performance varies depending on configuration and usage, we expect the decrease in resource and battery usage to create a better browsing...
Read more